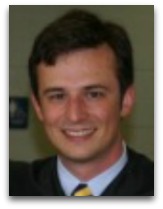 In human physics, James Weatherall (c.1983-) is an American physicist, philosopher, and mathematician noted for his 2013 book The Physics of Wall Street, wherein he discusses Brownian motion, among other subjects, connecting finance to physics. The thrust of the book seems to be themed around the following quote: [1]

“I can calculate the movements of stars, but not the madness of men.”

Education
Weatherall completed his AM and AB both in physics at Harvard University in 2005, a mathematics and physics PhD in 2009, with a dissertation on “Quantum Control of Linear Susceptibility in Five Level Atoms via Dressed Interacting Ground States, With Focus on Group Velocity Control”, at Stevens Institute of Technology, his MFA, in 2010, with a thesis on “The Scientific Image: On the Uses of Technical Language in Fiction”, at Fairleigh Dickinson University, and a philosophy PhD in in 2012, with a dissertation on “Mass and Motion: Topics at the Interface of General Relativity and Newtonian Gravity”, at the University of California, Irvine. Weatherall currently is an assistant professor of logic and philosophy of science at the University of California, Irvine, where he is also a member of the Institute for Mathematical Behavioral Science.