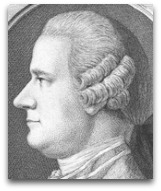 Heat conduction
In 1789, Ingenhousz tried to measure the thermal conductivities of different substances, and in one experiment, used uniform wires made of different metals, coated them with wax, and then noted the speed with which the ‘melting point’ travelled along the wires when one end was heated. [1]

Photosynthesis
In 1771, Ingenhousz, after meeting with Joseph Priestley, who had found that plants make and absorb gases, began to experiment with plants and respiration; by 1779, he had found that plants, in the presence of light, give off bubbles, which he identified as oxygen, from their green parts, while in the shade, do not give off oxygen bubbles, but rather give off carbon dioxide; this led him to realize that the amount of oxygen given off in the light is more than the amount of carbon dioxide given off in the dark, which demonstrated that some of the mass of plants comes from the air, and not only the water and nutrients in the soil.

Quotes | On
The following are quotes on Ingenhousz:

“Go on with your excellent experiments, produce facts, improve science, and do good to mankind. Reputation will follow. You can always employ your time better than in polemics.”

“Animal electricity: The observation that certain animals could give shocks resembling the shock of a Leyden jar induced a closer examination of these powers. The ancients were acquainted with the benumbing power of the torpedo-fish [torpedo ray], but it was not till 1676 that modern naturalists had their attention again drawn to the fact. Edward Bancroft was the first person who distinctly suspected that the effects of the torpedo were electrical. In 1773, John Walsh (d. 1795) and Jan Ingenhousz (1730–1799) proved by many curious experiments that the shock of the torpedo was an electrical one (Phil. Trans., 1773–1775); and John Hunter (id. 1773, 1775) examined and described the anatomical structure of its electrical organs. Alexander Humboldt and Joseph Gay-Lussac (Ann. Chim., 1805), and Geoffroy Saint-Hilaire (Gilb. Ann., 1803) pursued the subject with success; and Henry Cavendish (Phil. Trans., 1776) constructed an artificial torpedo, by which he imitated the actions of the living animal.”