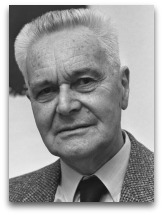 In existographies, Jan Tinbergen (1903-1994) (GEcE:#) (CR:9) was a Dutch physical political economist noted for his 1962 “gravity equation” of the so-called gravity model of international trade and economics.

Overview
In 1962, Tinbergen introduced a "gravity equation", a statement of which is the hypothesis that: [1]

“Interaction between large economic clusters is stronger than between smaller ones, and nearby clusters attract each other more than far-off ones.”

English physical urban architect Alan Wilson commented that by 1966 the gravity model, in the social sciences, was “well-known”, but he may have not been referring to the same gravity model. [4]

In 1969, Tinbergen was inaugural Nobel Prize in economics, along with Ragnar Frisch, for "having developed and applied dynamic models for the analysis of economic processes"; other noted hmolscience recipients in the years to follow include: Paul Samuelson (1970), Tjalling Koopmans (1975), Robert Fogel (1993), John Nash (1994), and Thomas Schelling (2005). [3]

Education
Tinbergen completed his BS in mathematics and theoretical physics at the University in Leiden, while at the same time pursing his interests in animal behavior, social democracy, and economic depression theories, largely being influenced by Paul Ehrenfest. He comments on this period in retrospect: [2]

“Ehrenfest I owe a great deal. I studied physics at a time when a number of fascinating persons were there together. Ehrenfest would not instruct as such, as he preferred dialogue. Thanks to him I could participate in discussions with Albert Einstein. Also Kamerling Onnes, Lorentz and Zeeman were present. Being a student in the hands of such teachers, you are very fortunate indeed.”

Tinbergen then completed graduate work under Ehrenfest who, one his own, was also said to have been interested in developing mathematical theories in economics, stimulated by his notion that there should be an analogy between thermodynamics and economic processes. While Ehrenfest’s economic thermodynamics ideas did not result in publications, he did encourage his then graduate student Tinbergen to follow up on this. The result was Tinbergen's 1929 thesis “Minimization Problems in Economics and Physics” was devoted to problems in physics, economics, and politics.

Quotes | On
The following are quotes on Tinbergen:

“My talk title, could has as aptly been ‘Gibbs circle in economics’. It would of course have begun in New Haven with Irving Fisher being at the epicenter. Edwin Wilson, Gibbs last protégé, transported his tradition to MIT, and Harvard. Lawrence Henderson, a zealot for Pareto’s sociology, who [interacted with Wilson], was not quite an economist, but he did proselytize for Gibbsian equilibrium in blood and elites. Wilson was my master, first among equals. Through this lineage, I could claim Gibbs as my [intellectual] grandfather; and when my first PhD student Lawrence Klein came to generalize the Le Chatelier principle to quadratic forms of statistical variances, this Nobelist could claim rights to the apostolic succession [Gibbs’ great intellectual grandson]. At least two Nobel laurates in economics show the Gibbsian influence: Jan Tinbergen, first winner of the Alfred Nobel Award in economics, was a protégé of the Ehrenfests; the late Tjalling Koopmans of Rotterdam and Yale similarly began study as a physicist, with an approximation law to his credit that still after fifty years is employed by physicists.”