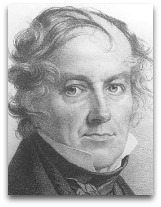 In existographies, Jean Biot (1774-1862) was a French physicist, astronomer and mathematician, noted for []

Heat
In 1804, Biot measured the steady-state temperature of an iron bar heated at one end, the results of which enabled him to formulate a simple theory of heat flow that took into account internal and external effects. [2]

Atomic theory
In c.1810s to 1830s, Biot was the central person of the 'atomic theory' group at the Ecole Polytechnique, including Augustin Cauchy (1789-1857) and Simeon Poisson (1781-1840), who, in the 1810s to 1830s, employed models in which the atom consisted of a massive nucleus surrounded by an atmosphere of imponderable ether particles. [1]

In 1816, Biot published a textbook on experimental and theoretical physics, wherein he mentioned views on atomic structure similar to Andre Ampere’s ‘geometric model’ .

Light
In c.1809, Biot, a supporter of the corpuscular theory of light, in the wake of Thomas Young’s 1806 wave theory of light experiments and Etienne Malus’ 1808 experiments showing that reflected light became polarized, began to make some significant advances in optics. [4] Biot studied, studied, e.g., the polarization of light passing through chemical solutions. [3]

Electromagnetism
In 1820, Biot, working with Felix Savart, discovered the intensity of the magnetic field established by a wire carrying an electric current is inversely proportional to the distance from the wire; this phenomenon was later dubbed the “Biot-Savart law”. [4]

Further reading
● Biot, Jean. (1826). Elements of Electricity, Magnetism, and Electro-Magnetism: Embracing the Late Discoveries and Improvements, Digested into the Form of a Treatise; Being the Second Part of a Course of Natural Philosophy. Cambridge.