Overview
In 1678, Hautefeuille, in his Perpetual Pendulum, with a new Pendulum and the Way of raising the Water by the means of the Canon Powder, gave a depiction of a gunpowder engine, shown below, where: [4]

According to which, as shown in figure VII, adjacent (right) a rising pipe delivered into a vessel that was partially evacuated by exploding a gunpowder charge in it, and the water so raised was drawn off by a tap into a reservoir. In figure VIII, the force of the gunpowder explosions brought about the raising of the water through non-return valves as high as the materials would stand.

Huygens
Hautefeuille, supposedly, twice got into a dispute with Christiaan Huygens, at some point, about the rights to his inventions.

Correctly, Leonardo da Vinci (c.1495) sketched and explained the operation of the first gunpowder engine employed to raise weight, which was followed by Christiaan Huygens (1673), and his assistant Denis Papin (1674), followed by Hautefeuille (1678); one summary of which is as follows:

“In several surveys of this important chapter of the history of technology, the abbe Jean de Hautefeuille (1678) is credited with the invention of the first gunpowder engine. This is a manifest error: the experiments of Huygens were known at least from 1673, even though he published them later. Besides, Hautefeuille's device is a water-raising box and not an engine.”

What ever the case, Hautefeuille, as some have claimed, only described the theory, before or after Huygens, while Huygens actually built the devices and connected one with a pumping station. [3]

Misattribution
In 1961, Hautefeuille is mentioned in the German childrens “inventor series” book or cartoon Mosaic, which wherein Huygens is said to “remember” a machine described by Hautefeuille, and thereafter constructs an explosive pump powered by gunpowder; the online wiki now incorrectly lists the following image as being the “invention of Hautefeuille”, whereas the image shown is a sketch of the 1682 Huygens engine: [3] 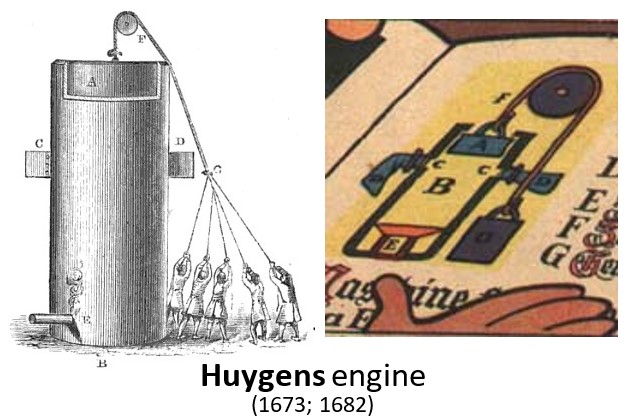 Other
This model, according to Joseph Needham (1987), were precursory to Thomas Savery’s so-called “water commanding engine” (1698).

Quotes | On
The following are quotes on Hautefeuille:

“Jean Hautefeuille, the son of a French boulanger, born Orleans, adopted by the Duchess of Bouillon at the suggestion of De Sourdis, profiting by the great opportunities offered him, entered the Church, and became one of the most learned men and greatest mechanicians of his time. He studied the many schemes then brought forward by inventors with the greatest interest, and was himself prolific of new ideas.

In 1678, he proposed the use of alcohol in an engine [see: alcohol engine], ‘in such a manner that the liquid should evaporate and be condensed, tour a tour, without being wasted’—the first recorded plan, probably, for surface-condensation and complete retention of the working-fluid.

He proposed a gunpowder engine, of which he described three varieties. In one of these engines [first design], he displaced the atmosphere by the gases produced by the explosion, and the vacuum thus obtained was utilized in raising water by the pressure of the air. In the second machine, the pressure of the gases evolved by the combustion of the powder acted directly upon the water, forcing it upward; and in the third design, the pressure of the vapor drove a piston, and this engine was described as fitted to supply power for many purposes.

There is no evidence that he constructed these machines, however, and they are here referred to simply as indicating that all the elements of the machine were becoming well known, and that an ingenious mechanic, combining known devices, could at this time have produced the steam engine. Its early appearance should evidently have been anticipated. Hautefeuille, if we may judge from evidence at hand, was the first to propose the use of a piston in a heat engine, and his gunpowder engine seems to have been the first machine which would be called a heat-engine by the modern mechanic. The earlier ‘machines’ or ‘engines’, including that of Hero and those of the Marquis of Worcester, would rather be denominated ‘apparatus’, as that term is used by the physicist or the chemist, than a machine or an engine, as the terms are used by the engineer.”