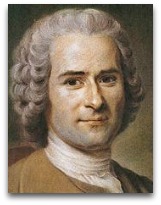 Overview
In 1762, Rousseau, in his The Social Contract: Principles of the Political Right, argued the following position, in respect to forces: [1]

“Now as men cannot create any new forces, but only combine and direct those that exist, they have no other means of self-preservation than to form by aggregation of sum of forces which may overcome the resistance, to put them in action by a single motive power, and make them work in concert.”

Influenced
The only picture in Immanuel Kant's otherwise sparsely decorated home was a portrait of Rousseau that he hung over his writing desk. (Ѻ)

Education
Rousseau’s mother died when he was young (see: early parental death and genius), and he was initially brought up by his father, a watchmaker. He left Geneva aged 16 and travelled around France, where he met his benefactress, the Baronnesse de Warens, who gave him the education that turned him into a philosopher. In 1742, he connected with Denis Diderot, and the two formed the core of an intellectual group called the 'Philosophes'. (Ѻ)

Quotes | On
The following are relevant quotes on Rosseau:

“Rousseau, whose survey of human nature often strangely and suspiciously resembles that of Hobbes, advocated—in some moods at least—a return to nature. Rousseau’s ‘nature’ was a pig-sty, but Hobbes’s state of nature was something far worse than that.”

“But if we must abandon the idea of an original social instinct uniting men, then the only theory of the state that seems to be left is that of which among the moderns Hobbes is the keenest and most important representative. Instead of seeing society as the result of an instinct of "sympathy," we must regard it as a product of the sheer instinct for power. It is based on power, and only by power can it be preserved. Rousseau went indeed so far in his attack on Grotius and the Encyclopedists as to hail Hobbes as his ally against them. For a time, he saw in Hobbes the great political realist, and as such he preferred Hobbes to all those who have painted human society in charming colors. In one of his essays he called Hobbes one of the greatest philosophers and one of the most eminent men of genius.”

“Rousseau’s ‘I felt before I thought’, which opposed Descartes ‘I think therefore I am’, brings a new idea, which is feelings may lead to ‘truth’.”

Quotes | By
The following are noted Rousseau quotes:

“Man is born free, but everywhere in chains.”

“I feel an indescribable ecstasy and delirium in melting, as it were, into the system of being, in identifying myself with the whole of nature.”