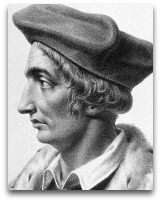 In existographies, Jean Fernel (1497-1558) (CR:23) was a French physician, coiner of the term ‘physiology’ referring to the study of the body’s function, and also "pathology", the study of the body's disease—his philosophical derived in contrast or upgrade from the older views of Aristotle—who is specifically noted for his 1548 On the Hidden Causes of Things, a Platonic-style dialogue of sorts between the three fictional friends, Eudoxus, Brutus, and Philiatros, an example quote of which is the following:

“The stone selenite holds the image of the moon even to her very phases. The magnet-stone points to the pole star. These are dead things, says Brutus, do living things likewise draw influences from the sky.”

This erudite dead things vs. living things quote, among others, are employed as an intellectual springboard for English physiologist Charles Sherrington’s 1938 very-sharp Man on His Nature—which is the most explicative work in the defunct theory of life corpus.

Overview
The following is an abstract from a 2005 edited, annotated, and translated reprint of his On the Hidden Causes of Things: (Ѻ)

“An annotated translation of Jean Fernel's On the Hidden Causes of Things (1542), with a scholarly introduction showing its great importance in the intellectual history of the Renaissance. The only sixteenth-century writer, apart from Paracelsus, to develop a new theory of disease, Fernel was also a leading natural philosopher. His survey of the role of occult qualities and powers in life processes, especially generation, and in contagious and pestilential diseases draws upon astrology, alchemy, and other occult sciences. Although an original and innovatory thinker, Fernel operated within the parameters of Aristotelian and Galenic philosophy, while drawing upon Platonic, Stoic and other worldviews. Accordingly, this book shows the continued vitality in traditional thought in the period just before the Scientific Revolution.”

On the theory of "innate heat", in Fernel's day, in the context of the life/non-life issue, Sherrington quotes the following by Fernel, from his On the Hidden Causes of Things:

“If there is one attribute which more widely than any other is evident as inherent in life it is warmth. In that we come across a great thing. A great thing like those great things which were found by the ancients. It is the innate heat. A law common to all animal kind, an ordinance of nature, is that they live by innate heat. While they live they are possessed of heat appropriate to them. When dead that heat is extinguished and they are cold. That is plain even to sense; it is heat sensible to man; a touch demonstrates it. It is however not so evident in plants. Yet in them no less than in animals it holds true. Further, the more sentient and active the animal the greater and more liberal the heat it has. If you as a reason, think on the excellence of the sun, prime prince and controller of the world, favoring and forwarding every life that is. By its chastened heat it supports them from without in doing what life does. Now if its heat from without can so cherish, whereas cold checks, life, is there not within living things a heat which cherishes what they do, a heat which even of the same nature as the suns? Did not Aristotle well and truly say, and leave it written for all posterity, that:

‘Heat is the condition of life’?

He defined death as the extinction of heat. Now this heat is innate heat. The innate heat is a heat which can be observed to survive even in the coldness of the decrepitude of age. The coldness of old age dominates, it is true, the material fire which is in the temperament, by the old age cannot, so long as there is life, overcome the innate heat itself. It is in the virtue of this heat that the snake lives, although its temperament is cold. So too mandragora, and the poppy and all of the herbs of the frigid temperament.

This heat is not of the commingling of the elements. The body at death demonstrates that. Death occurs and still the body retains the structure and shape in all its parts. We recognize our friend, although his life is not there, and his heat is not there. The innate heat has fled him. It is not therefore traceable to the elements. They still compose the body. Therefore the innate heat—the vital heat—must have its source ‘elsewhere’.”

On Aristotle’s discussions of darkness being the privation of light, cold the lapse of innate heat, etc., here we recall the 2004 "Evil Does not Exist" video rendition of this (misattributed to Albert Einstein), which took the form, it seems of a summary of French philosopher Rene Descartes expansion on Aristotle’s light/darkness discussion; particularly Descartes’ 1637 Discourse on Method (section: What Do Heat and Light of Fire Consist In?), and his 1641 Meditations (primarily the Third), in which he argues that cold is merely the absence of heat, that darkness is the absence or recess of ethereal substance of the heat of fire (or stars), discusses good and evil, and intertwines these in with discussion on the possible existence a deity. [7] On heat in general, in relation to the above passage, Sherrington humorously states rather cogently:

“In physical science no phenomenon perhaps has proved more puzzling, and no conception has had so chequered a career, as that of heat.”

Sherrington
On deanthropomorphism, the following being a few representative statement by Sherrington: [2]

“Our sixteenth-century Fernel viewed the body as a tenement for faculties. One faculty was that which actuated the various bodily movements. Then came Descartes with is robot [see: Cartesian automata], a mechanism actuating itself. Such too had been Descartes’ thought with respect to the motions of the macrocosm. For Kepler still, a century later than Fernel, each planet was ridden by an angel. Then later with the ‘reign of law’ that guidance became a ‘force’, e.g. gravitational. Today that ‘force’ has in turn disappeared. There remains a curvature of space. The human mind looking at nature has had to dehumanize its point of view—it has, using Samuel Alexander’s word, to ‘deanthropize’ itself. It has to dispense with ‘causation’, which is regarded as an anthropism, but is yet a final cause. It is more faithful to William of Occam.”

On the illusion of the unbridgeable gap, i.e. that the various conceptualized divides (e.g. life/non-life) or dualisms (e.g. mind/matter) are fictional, the following is a representative statement by Sherrington: [2]

“In the middle ages, and after them with Fernel, as with Aristotle before, there was the difficulty of the animate and the inanimate and finding of the boundary between them. Today’s scheme makes plain why that difficulty was, and dissolves it. There is no boundary.”