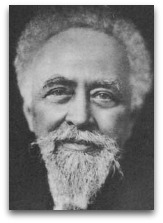 In science, Jean Perrin (1870-1942) (CR:15) was a French physicist noted for his 1909 study of Brownian motion, according to which he provided demonstrable proof of the existence of atoms, namely by determining Avogadro’s number via several methods; he also showed that cathode rays were made of negative electric charge; and explained that solar energy resulted from thermonuclear reactions of hydrogen.

See: Defunct theory of life; life does not exist

In 1903, French physical chemist Jean Perrin, noted winner of the 1926 Nobel prize for proving that molecules exist, in his Treatise on Physical Chemistry (chapter: “The Principle of Evolution”), was one of the first to discuss the inconsistencies the notion of evolution, in the context of the second law, heat death theory, and so-called “life” originated or rather being synthesized from “dead” atoms (in the context of Carnot’s principle), one of his comments being: [3]

“Molecules and atoms are lifeless beings that never evolve.”

The first part of this statement is quite accurate: atoms and molecules are indeed lifeless. A single hydrogen atom is not alive, nor are its derivatives (molecules). When one first begins to calculate the molecular formula for a single human (e.g. Sterner and Elser, 2002; Thims, 2007, etc.) and to specifically define a human as a "molecule", however, one is quickly confronted with a paradox: at what point, second, or reaction mechanism step (in the evolution timeline) on going from hydrogen to human, do molecules come alive? The beginning student will likely have been told that the Urey-Miller experiment (laboratory produced life) or Darwin's warm pond model solved this issue long ago, and that there only remain a few pieces of the puzzle to work out: but this could not be farther from the truth.

On the second point, i.e. “molecules don’t evolve”, here we are to take recourse in the “hydrogen to human” mindset and the Goethean metamorphosis (proto-evolution theory) to wrap our head around how to reconcile Darwin with Dalton + Clausius; some of the first to do this semi-cogently were: Lawrence Henderson (1913), Harold Blum, in his “A Consideration of Evolution from a Thermodynamic View-Point”, cites Lawrence Henderson (1913) and Gilbert Lewis (1923), to outline a coupling theory plus free energy decrease based theory of orthogenesis (directional-change) conceptualized evolution, in the explicitly-stated "religious-free" form of what he refers to as "chemical peneplanation", i.e. an synonym the semi-modern term Gibbs landscapes, as seems to be the case. [5]

Atoms | Proof
In 1909, Perrin proved that atoms exist by calculating Avogadro's number using three different methods, all involving liquid phase systems. First, he used a gamboge soap-like emulsion, second by doing experimental work on Brownian motion, and third by confirming Einstein’s theory of particle rotation in the liquid phase. In 1926, Perrin's work was recognized by his win of the Nobel Prize in physics for proving, conclusively, the reality of the “atomistic description” of nature—a recognition often said to mark the final and formal acceptance of Leucippus’ c.450BC atomic theory by science officially.

Religion | Atheism
Perrin was an atheist: [5]

“Jean and Francis Perrin held similar political and philosophical ideas. Both were socialists and atheists. Like many nineteenth century French men of science, Jean Perrin viewed science almost as a religion.”

He and his son, Francis, were atheists who had science as their religion.

Quotes | On
The following are Perrin-related quotes:

“This suicide must be ranked as one of the great tragedies in the history of science, made all the more ironic by the fact that the scientific world made a complete turnabout in the next few years and accepted the existence of atoms, following Perrin’s experiments on Brownian motion.”

“The invariable number N is a universal constant, which may appropriately be designated Avogadro’s constant.”