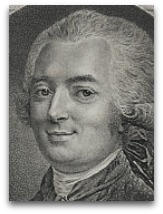 In existographies, Jean Delisle de Sales (1741-1816) (IQ:190|#67) (CR:89) was a French polygraph and philosopher noted for his 1770-initiated seven-volume The Philosophy of Nature: Treatise on Human Moral Nature, wherein he employs materialism philosophy logic, presents social Newton illustrated play “Reasonable Drama”, goes against the prevailing 6,000-year-old creationism model of the Bible, digresses on rational morality, among other controversial topics; in the 1789 edition of which he coins the term "human molecule" and introduces the human molecular hypothesis.

“Sales’ [writings] are a morass of long-winded and conventional hodgepodge of ideas. Delisle de Sales is basically a Voltairian. But in natural philosophy he often inclines to Robinet, and his idolization of nature frequently brings him alongside Rousseau. He approves of Condillac, Helvetius, and with some hesitation of d’Holbach. As a convinced theist, however, he fulminates against the atheist La Mettrie; believing firmly in the immortality of the soul, he ‘demonstrates’ it with the story of Richardson’s Clarissa, and by way of further proof with a doleful tale of his own, ‘the pathetic history of Jenny Lille’.”

The following is a circa 2010 French-to-English translated Bibliopolis.com book description of Sales:

"Izouard, who styled himself, Delisle de Sales, was a member of the group of the Ôphilosophes.Õ ÒHe wrote a work called Philosophie de la Nature (in 1770) which was condemned by the Chatelet in 1775 and after which Sales was imprisoned. Chatalet, after lengthy proceedings sentenced, Delisle to perpetual banishment on absurdly inadequate grounds, but the sentence was quashed by the parliament.

Izouard wrote a number of philosophical, historical, and political works including a defense of freedom of the press, and a utopian work based on Plato's Republic which impressed Voltaire, but he remains a relatively unstudied figure in French 18th century philosophy.

The fourth edition had first appeared in 1793-5 but our author condemns the poor printing of that edition and has corrected the errors and omissions of that issue and has added some new text and a map of Atlantis. It is interesting to note that he remarks that America has been left off his maps as it is still too new to picture accurately. The title of Izouard's work is reminiscent of Court de Gebelin's grammatically based work and is sometimes confused with it but Izouard calls the other work a poor performance. One available book of his contains seven engraved t.p.s & 30 plates including 13 folding maps (3 fully hand-colored), and 3 folding astrological star charts some signed by Macret, Monnet, Schmitx, etc.; portrait of Delisle de Sales by Duflos after Borel."

Reasonable Drama | Newton in Senegal
In 1777, Sales’ penned “Reasonable Drama”, a short Socratic dialogue style satirical play, accompanied by an image of “Newton in Senegal”, shown adjacent, which is found in volume four of his The Philosophy of Nature, with a accompanying discussion section, of controversial nature, the gist of which, as summarized by Patricia Fara (2002), situates an allegorical tale of Newton perched by the coast in Senegal, Africa, representative of a civilizing force of the enlightenment, taking time off from checking his calculations of the tides to contemplate the grandeur of nature, during which Newton, presented as vegetarian, enters into a dialogue with a merman, an oyster, and a native African about whether or not they should eat each other.

Newton, set up as an icon of rationality, concludes that only African is worth teaching, since his perception of God as a cockchafer does at least indicate that he can acquire a human soul. [4]

Bible | Earth age
Sales challenged the young earth biblical 6,000 year old date of creation which was popular in his day, instead believing on the basis of astronomical data that the earth was around 140,000 years old and that it took 40,062 years to cool down following its formation. He however rejected the three-million year old date of the earth which was taught in India at the time. [3]

Sales' Philosophy of Nature, supposedly, was condemned by the Chatelet (a Paris courthouse and prison) in 1775 after which Sales was imprisoned and later sentenced to perpetual banishment on what have been called "absurdly inadequate grounds". Alternatively, at first the book passed passed unnoticed, by then in 1777 began to attract objectionable attraction owing to its moral views considered contrary to religion, during which time he was condemned to perpetual banishment by the order of the Chatelet.

“Philosophically, Delisle claims to Locke and envisions a world whose god is the architect and the nature of the machinist. A primitive fire, God's instrument and agent of nature, communicates to the world movement and life. In psychology, Delisle was inspired by Descartes basing the exploration of human faculties on the experience of consciousness rather than the rationalist assumptions. In ethics, consistent with French philosopher Claude-Adrien Helvetius, who says that self-love is the sole foundation. The state of nature, in his view, a dream that man is born to live in society, and all laws that underpin the social order are identical with those upon which our own happiness. The ideal government is held as far from the despotism of anarchy.”

from the fourth volume of his multi-edition, multi-volume opus The Philosophy of Nature: Treatise on Human Moral Nature, first published in 1770 and expanded over the years, supposedly going through seven editions, increasing in size to include up to a dozen volumes. The following shows the full French to English translation where Sales uses the term molécules humaines or human molecules: [1]

Quotes | On
The following are quotes about Sales:

“I think this work is worn out. The same goes for philosophical books in general, which have rarely been requested for more than a year now.”

“Among his many books, is often found a vast erudition, often brilliant ideas and new.”

“Delisle de Sales was sentenced to perpetual exile, and confiscation of all his property, on account of his work on the Philosophy of Nature.”