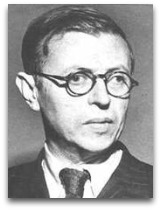 In existographies, Jean-Paul Sartre (1905-1980) (IQ:165|#461) [RGM:355|1,500+] (Stokes 100:73) (EPD:F2) (Becker 139:13) (GPhE:#) [CR:54] was French atheist existentialist philosopher, predominately noted for his 1943 Being and Nothingness, who promoted an anti-deterministic variety, i.e. science not based on causality, of individual “freedom as the foundation of all values” type of existentialism, according to the logic of “existence precedes essence”, meaning that man first materializes into the world, encounters himself, and only afterwards defines himself.

Sartre's work is similar, albeit not on all points, to Albert Camus (see: Camus model).

Materialism
Sartre, as he conceived the term, seems to have been anti-materialistic, the logic of which he summarizes as follows: [1]

“The effect of any form of materialism is to treat all men—including oneself—as objects, which is to say as a set of predetermined reactions indistinguishable from the properties and phenomena that constitute, say, a table, a chair, or a stone. Our aim is exactly to establish the human kingdom as a set of values distinct from the material world.”

Sartre goes on to base his freedom-based existentialism logic on Rene Descartes' cogito motto of "I think therefore I am" model of consciousness confronting itself.

Difficulties on theory
Sartre’s advice that he gives to people lost in the confusion of a world devoid of god or religious belief is the following: [1]

“You are free, so choose; in other words, invent. No general code of ethics can tell you what you ought to do; there are no signs in this world.”

Sartre, to uphold this “humans are free” logic, opening denies that science makes use of the notion of causality.

Sartre, in his latter year, began to waver on his atheistic beliefs, leaning, in the end, towards Judaism. In 1974, in an interview with Simone de Beauvoir, his lover, he stated: (Ѻ)

“I see myself as a being that could, it seems, only come from a creator. This, however, is not a clear, exact idea.”

In 1980, while on his deathbed, in conversation with Pierre Victor, he supposedly said the following: [3]

“I do not feel that I am the product of chance, a speck of dust in the universe, but someone who was expected, prepared, prefigured. In short, a being whom only a creator could put here; and this idea of a creating hand refers to god.”

The 1996 book Hope Now: the 1980 Interviews (Ѻ) goes into this deconversion episode.

Quotes | By
The following are quotes by Sartre:

“Hell is just other people.”

“Existence precedes essence. A human first exists, encounters himself, surges up in the world, and defines himself afterwards.”

“Everything has been figured out, except how to live.”

“I was led to unbelief not though conflicting dogma but through my grandparent’s indifference.”