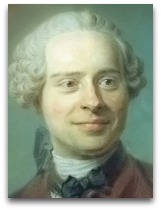 In existographies, Jean d’Alembert (1717-1783) (IQ:185|#84) (Cattell 1000:124) (GME:26) (GPE:71) (CR:35) was a French mathematical physicist and encyclopedist, PhD advisor to Pierre Laplace (see: Euler genealogy); whose 1772 Encyclopedie, co-written with Denis Diderot, is said to mark “end of an area in which a single human being was able to comprehend the totality of knowledge” (see: "last persons to know everything"), noted generally for his d’Alembert’s principle.

Diderot | Living point
In 1769, Denis Diderot grappled with what he called the “living point” issue, problem, or paradox in his D’Alembert’s Dream, via Platonic dialogue style, wherein the character D’Alembert, modeled Jean d'Alembert, outlined a material, atheistic view of the universe, and on the puzzle of the origin of life tries to reason how an animal can be constructed from the union of so-called dead or inert atoms and molecules to form that he calls ‘living points’ or ‘living molecules’ to then form what he calls a ‘living unity’, which is summarized as follows: [1]

“Nothing at first, then a living point … Another living point attaches itself to this one, and then another—and from these successive conjoinings a single living unity results, for I am certainly a unity …. It’s certain that contact between two living molecules is something different from the contiguity of two inert masses … and this difference—what could it be? … a customary action and reaction … That way everything comes together to produce a sort of unity which exists only in an animal … My goodness, if this isn’t the truth, it’s really close to it.”

This type of query, to note, historically, is one of the more famous mindset stepping stone examples into the defunct theory of life position, life does not exist conclusion, and life terminology reform solution. In modern terms, this query translates to the premise of a special one unique mechanism "living reaction" governed by some type of "funny" free energy change, conceptually occurring sometime between the Hadean era (4.0 BYA) and the formation of bacteria (3.85 BYA), i.e. a type of magical or perpetual motion stylized "reaction point", so to say.

Vis viva
D’Alembert was, in some way, involved in the vis viva dispute. [2]

Quotes | On
The following are quotes on or about d’Alembert:

“Accordingly, we find Euler and D'Alembert devoting their talent and their patience to the establishment of the laws of rotation of the solid bodies. Lagrange has incorporated his own analysis of the problem with his general treatment of mechanics, and since his time M. Poinsot has brought the subject under the power of a more searching analysis than that of the calculus, in which ideas take the place of symbols, and intelligent propositions supersede equations.”

Quotes | By
The following are d’Alembert quotes:

“All that we see distinctly in the motion of a body is that the body traverse: a certain distance and that it takes a certain time to traverse that distance. lt is from this one idea that all the principles of mechanics should be drawn, if we wish to demonstrate them in a clear and accurate way; so no one need be surprised that for this reason I have turned my thought away from cause of motion to consider solely the motions that they produce; and that I have entirely excluded force inherent in bodies in motion, obscure and metaphysical entities which can only cast shadows on a science that is in itself clear. It is for this reason that I have thought it bat not to take up the consideration of the famous question of vis viva. For thirty years mathematicians have been divided in opinion as to whether the force of a body in motion is proportional to the product of the mass by the velocity [mv], or to the product of the mass by the square of the velocity mv²]; for example whether a body twice as large as another one, and which has duce times as much velocity has eighteen times as much force or only six times as much.”

“A philosopher is a fool who torments himself while he is alive, to be talked of after he is dead.”