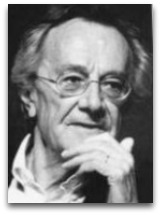 In hmolscience, Jean-François Lyotard (1924-1998) was a French philosopher noted, in philosophical thermodynamics, for his 1990s metaphorical use of entropy in his descriptions of cultural and social change, as they differ by being isolated, closed, or open, in relation to the future and "progress". [1]

Overview
In 1993, Lyotard, in his Political Writings, posited that war and conflict are the result of entropy: [2]

“Conflict (and ultimately war) does not arise between human and nature; rather, the struggle is between more developed systems and something else that is necessarily less developed and that the physicists know as entropy, the second principle of thermodynamics.”

Lyotard reasons that the third world is nothing but a source of entropy for the autopoesis of the great monad and that the conflict between more human and the more inhuman types of people is between negative entropy or negentropy, which he defines as development, and entropy, the opposite of development. In relation to the Germany and the fall of the Berlin Wall (1989) and Islam and the Gulf crisis (1990), as an examples of an isolated systems, Lyotard tells us:

“A system is all the more performative for being more ‘open’; and reciprocally, it is condemned to be eliminated by its competitors or by mere entropy if it closes in on itself.”

In addition to this statement, Lyotard comments that “Brezhnev”, the leader of the USSR from 1964 to 1982, “should have spent more time studying thermodynamics”. [3]