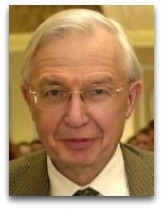 In human chemistry, Jean-Marie Lehn (1939-) is a French chemist noted for his 1995 Supramolecular Chemistry, a textbook based on his 1978 Baker Lectures given at Cornell University, in which he defines the newly-emerging field of “supramolecular chemistry” as a type of beyond molecular chemistry subject whose goal is to understand non-covalent intermolecular forces and to gain control over the intermolecular bond and to introduce this subject in laymanized terms as follows using Empedocles-Goethe stylized chemistry aphorisms: [1]

“Supramolecular chemistry is a sort of molecular sociology! Non-covalent bonds define the inter-component bond, the action and reaction, in brief, the behavior of the molecular individuals and populations: their social structure as an ensemble of individuals having its own organization; their stability and their fragility; their tendency to associate or to isolate themselves; their selectivity, their ‘elective affinities’ and class structure, their ability to recognize each other; their dynamics, fluidity or rigidity or arrangements and of castes, tensions, motions and reorientations; their mutual action and their transformations by each other.”

In other words, Lehn here alludes to the notion that supramolecular chemistry is the study of interactions of supermolecules akin to German polymath Johann Goethe’s 1809 Elective Affinities, the chemistry of human molecules.

“A receptor-substrate supermolecule is characterized by its geometric (structure, conformation), its thermodynamic (stability, enthalpy and entropy of formation) and its kinetic (rates of formation and of dissociation) features.”

Education
Lehn completed a BA in philosophy (1957), BS in natural sciences (1957), and PhD in chemistry (1963), all at the University of Strasbourg. He did post-doctoral work for a year at American organic chemist Robert Woodward's laboratory at Harvard University, working among other things on the synthesis of vitamin B12. In 1970 he became a professor of chemistry at Louis Pasteur University in Strasbourg. From 1979 to 2010 he was professor at the College de France in Paris and director of the Supramolecular Chemistry Laboratory in Strasbourg. He continues presently to direct this laboratory as Professor Emeritus at the University of Strasbourg. [2]

Other
Lehn who won the 1987 Nobel Prize in chemistry for development and use of molecules with structure-specific interactions of high selectivity.