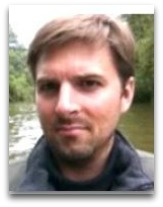 In ecological thermodynamics, Jeffrey Andrew Tuhtan (1979-), or Jeff Tuhtan, is an American ecohydraulic engineering noted for his 2011 PhD dissertation “A Modeling Approach for Alpine Rivers Impacted by Hydropeaking Including the Second Law Inequality”, wherein he employs thermodynamics in deriving a conceptual model designed for alpine river fish habitats.

Rivers, according to Tuhtan, are considered as finite-time, open irreversible thermodynamic systems in order to study the effects of the daily fluctuation effects of hydropeaking (large fluctuations in flow rates due to peak energy production) on alpine fish. The goal of his work is to improve mainstream 'first law' modeling approaches which only consider the external (potential and kinetic) energy of a river, and afterward develop semi-empirical relations tying 'abiotic-biotic' relations to hydraulic variables such as water depth and velocity. [1]

Doctoral thesis
Tuhtan, in his 2011 PhD dissertation “A Modeling Approach for Alpine Rivers Impacted by Hydropeaking Including the Second Law Inequality”, summarizes his applied thermodynamics hydropeaking project as follows: [2]

“The goal of the EcoPeak project is to develop a tool which can be used to predict the effects of hydropeaking on a given indicator species (e.g. brown trout, grayling) for various life stages. In this work, fish are represented as unique thermodynamic entities responding to hydrodynamic and thermodynamic gradients, where in the case of hydropeaking, the hydrodynamic terms are considerably larger. The model development has been heavily influenced by the constructal theory of Adrian Bejan and Sylvie Lorente.

Aspects of theoretical biology have been taken from Robert Rosen's relational biology. The works of Robert Ulanowicz and Donald Mikulecky have also strongly influenced the nature of the fish model development. Deterministic notions have been replaced with a probabilistic assessment of suitable locations, considering a single species and life stage's evolved physiological constraints. The purpose of this work is to incorporate a more rigorous biophysical approach, rooted in irreversible thermodynamics which allows for an improved habitat estimation for fish subject to highly instationary flow regimes.”


In his dissertation, Tuhtan employs German physicist Max Planck's theory of dilute solutions, as was first extended to animate systems by Werner Ebeling and Peter Mauersberger, the physical and thermodynamic principles developed by Sven Jorgensen and Adrian Bejan.

FishView
In 2014, Tuhtan, working together with robotics researcher Maarja Kruusmaa, shown adjacent examining the fish robot sensor prototype, and signal processing researcher Joni Kamarainen, launched the EU-funded project “FishView” on assessing fish passages by the use of robotic fish sensor and enhanced digital imaging, the project goal of which is to develop a novel fish robot based sensor to evaluate flows and conditions of rivers and fish passes and help to assess and develop better fish passages. (Ѻ)

Biocule
A noted turning point in Tuhtan's hydropeaking research was his reading, circa 2010, of British animal psychologist Lloyd Morgan 1929 "biocule", a term Morgan, being a student of English Darwinian evolution promoter and social molecule theorist Thomas Huxley, employed as being representative of the borderland between the atom/molecule scale and the amoeba/rabbit/oak tree scale of atomic organization, which according to English mathematical philosopher Alfred Whitehead are to be both seen as different "organisms"—albeit, as Morgan specifies, "not a living organism" (see: defunct theory of life). [4]

This rabbit as molecular organism or "biocule" point of view, naturally enough, led Tuhtan to the "human-as-molecule" work American electrochemical engineer Libb Thims, specifically Thims' 2008 history book The Human Molecule, in which, on the molecular evolution table of chapter nine, the approximate molecular formula for a fish is given as follows (see: fish molecule): [4]

This viewpoint led Tuhtan into the study and model fish habitat preferences in terms of energy and entropy considerations, as Thims had previously been doing in regards to his 2000s thermodynamic systems of human molecules models and as Huxley had groped at in his 1871 social chemistry/social molecule models and as his grandchildren Aldous Huxley and Julian Huxley later attempted, in the early 20th century, in their theories of human entropy and evolution as an anti-entropic process models.

In Tuhtan's work, fish are considered from both the top-down as parts of a larger ecosystem whole, and from the bottom-up as animate systems subject to the laws of thermodynamics, not explicitly as 'fish molecules.' The model Tuhtan currently is exploring posits that, for an individual fish swimming in a volume element, estimates of the entropy generation are made based on the pattern of the local energy landscape, whereby fish continuously attempt to position themselves in flow fields which tend to minimize the entropy generated by the river+fish system. The formulation requires the use of a 2D or 3D hydrodynamic model in order to accurately estimate small scale (sub 1 m²) changes in the local energy landscape.

Education
Tuhtan completed his BS in civil engineering in 2004 at California Polytechnic University, his MS (2007) in water resources engineering and management, and his engineering doctorate (2011) at the Institute for Modeling Hydraulic and Environmental Systems at the University of Stuttgart, Germany. [1] In December of 2013 he began his post-doctoral research in biorobotics at the Tallinn University of Technology in Estonia working on a robotic fish with an artificial lateral line sensor for the EU BONUS Innovation Project FISHVIEW.

“The human species is but one of many. Viewed from a sort of universal microscope, we appear as but a vast collection of molecules in motion. In our current state we are firmly attached to an Earthly substrate, feeding off the energy gradient of the Sun. The fate of our chemical species is undeniably tied to the affinities and energies of interaction required to maintain our evolving earth ecosystem. We live in a closed system. In order to understand the nature of things, we must learn more about both our reactions and our products.”

— Jeff Tuhtan (2012), PhD “A Modeling Approach for Alpine Rivers Impacted by Hydropeaking Including the Second Law Inequality” (pg. 1); cited by Libb Thims, in his piston and cylinder section (Ѻ), of his 2013 NIU lecture. [6]