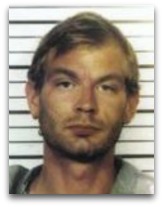 In existographies, Jeffrey Dahmer (1960-1994) [RE:34] (CR:13) was an American serial killer noted, among serial killers, for his discussion of philosophical nature of his course of action; namely that he enacted the Darwinian atheist killing scenario, aka the killing spree paradox, a thought scenario that commonly runs through the minds, particularly believers, of many who ruminate on the implications of a godless or atheistic-based universe.

“If it all happens naturalistically? What’s the need for god? Can’t I set my own rules? Who owns me? I own myself!”

“If a person doesn’t think there is a god to be accountable to, then—then what's the point of trying to modify your behaviour to keep it within acceptable ranges? That's how I thought anyway. I always believed the theory of evolution as truth, that we all just came from the slime. When we died, you know, that was it, there is nothing ...”

“If there’s no god and we all came from ‘slime’, then what’s the point of trying to modify your behavior to keep it within acceptable ranges?”