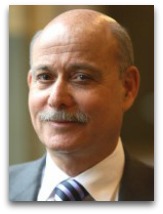 In hmolscience, Jeremy Rifkin (1945-) is an American economist and philosopher noted, in human thermodynamics, for his 1980 to present effort to use the error-filled Nicholas Georgescu conceptualized model of material entropy, as a philosophical platform, to argue argue for all sorts of social, political, ecological, and ethical positions; a kind of soft snake oil selling self-Sokal affair-ing like philosopher so to say.

Overview
In 1980, Rifkin, in his Entropy: A New World View, outlines an agenda-driven view, based on a modified-logic of Romanian-born American mathematician and economist Nicholas Georgescu, that the second law of thermodynamics mandates a universal tendency, as mediated through entropy, of economic, social, and environment systems to move from an ordered state to a disordered state. [1] Rifkin argues that every modern-day malady, from pesticides, to city crime, to mental illness, is due to what he refers to as the "Entropy Law". Rifkin’s core theory, reasoning incorrectly that negative entropy equates to “available energy”, is:

“Economic activity is merely human intervention in the ecological cycle, borrowing low-entropy inputs (fossil fuels), converting them into temporary utilities, and eventually discarding them back into the ecological cycle in the form of high-entropy wastes (pollution).”

Rifkin's new 2010 book The Empathic Civilization, argues that at the paradoxical relationship between empathy and entropy is at the very core of the human story; and comments on other topics such as Sigmund Freud's thermodynamic-chemistry based 1920 death instinct theory. [10]

Rifkin’s general theory is a result of a misinterpretation of the definition of entropy and the framework behind the second law of thermodynamics. Rifkin’s theory is that natural resources, such as wood, coal, and soil, what he calls terrestrial stock, constitute low levels of “material entropy” and that the conversion of this stored or “free” available energy into the products of pollution and waste constitute maximum levels of entropy, i.e. high levels of unavailable energy, as dictated by the idiom of the tendency for entropy to increase.

He quotes German physicist Rudolf Clausius’ 1865 version of the second law as “in the world, the entropy [the amount of unavailable energy] always tends towards a maximum”, where the square bracket quotes are his additions. From here, he makes the jump to the conclusion that “here on earth material entropy is continually increasing and must ultimately reach a maximum”, which he means to imply that humans are squandering the world’s fossil fuels.

Beyond this, based on the mis-logic of Georgescu-Roegen, Rifkin defines there to be two types of energies in nature: (a) that which is capable of conversion into work and (b) that which is incapable of conversion into work. He gives examples of a piece of coal which can be burned to produce work and its reaction products of sulfur dioxide and gases, which cannot be converted into work; as well as water at the top of a water fall that can be used to turn a water-wheel to do work verse the water at the bottom which cannot do gravitational work. He summarizes “these two states are referred to as available or free energy states verse unavailable or bound energy states”.

These terminological definitions, in turn, are borrowed from Georgescu-Roegen’s 1971 The Entropy Law and the Economic Process. [5] Georgescu-Roegen, in turn, culled his definitions from Webster’s dictionary among other non-thermodynamic sources. In doing this, unknowingly, Georgescu-Roegen was unaware that the phraseologies “free energy” and “bound energy” stem from the 1882 chemical thermodynamic descriptions of German physicist Hermann von Helmholtz who equated free energy as a measure of the chemical affinities of the reacting system and bound energy as irreversible energy associated with the work the molecules of the system do on each other that is bound to the system, which he associated with Clausius’ entropy or the quantity “TS”, i.e. system temperature times entropy. [4] In other words, Helmholtz showed, through derivation, how the long-sought "chemical affinity" (the force of reaction) of chemistry was measured by the "free energy" of the system, i.e. that which could be converted into other forms of usable energy (such as mechanical work or electricity) not by the heat of the reaction, which was the going theory in the mid 19th century.

Difficulties
All-in-all, Rifkin's theories on how thermodynamics fits into the various processes of human life are, in most cases, unsubstantiated and very illogical. He seems to throw the word "entropy" out where ever he sees fit. To cite one of many examples, he states, supposedly as a matter of fact, that "pesticides are destroying [the microorganisms of the soil], thus greatly hastening the entropy process of the soil." He uses the phrase "entropy watershed", repetitively, as a sort of foreboding as to a future time when nonrenewable fossil fuels will run out or when a facet of society will collapse. [2]

In one of his silliest examples, he uses incorrect versions of the first and second laws of thermodynamics to argue that military hardware fuels inflation. He starts out with an incorrect definition of the first law of thermodynamics, “the first law of thermodynamics tells us that the quantity of energy and matter is fixed”. Correctly, the first law has nothing to do with the quantity of matter being fixed. He continues, “because the military sector consumes six percent of the nation’s total energy use, along with massive quantities of nonrenewable mineral resources, the entropy increase represented by military hardware causes tighter resource supplies, which in turn fuels inflation.” [2]

In sum, Rifkin’s entire theory is based on a terminological misinterpretation through his referece of Georgescu-Roegen. The use of material entropy, as seeded by Georgescu-Roegen and promulgated by Rifkin, is generally seen as point of non-logic. Israeli physical chemist Brian Silver, for instance, states that “readers should be on guard against books in which entropy appears without a definition, or a faulty definition, and in which it is used in relation to undefined systems”. [6] He continues, “the outstanding example is Jeremy Rifkin’s Entropy: A New World View”. Moreover, in commentary on what he calls “Georgescu-Roegen’s brainchild”, Silver states that “the term material entropy is meaningless; it has not the slightest connection with entropy. [6] Likewise, American chemist Glen Gordon states that “in taking up entropy, Rifkin is like a child with a new toy—he has great fun applying the concepts to all aspects of our high-technology society.” [7]

In many of Rifkin’s musings, he seems to have completely jumped off the tracks in making certain thermodynamic arguments. In one example, in his section on minerals, he states that in regards to scares minerals such as copper, gold, antimony, bismuth, and molybdenum, and others, that recycling is often proposed as the answer to the future problem of mineral resource depletion. In rebuttal of this suggestion, he states that “it should not be forgotten that recycling also conforms to the second law of thermodynamics” and that “every time a mineral is recycled, some of it is inevitably, and irreversibly, lost.”

A number of things are incorrect about this statement. For one, a mineral, such as copper, is basically an atom, and atoms are never irreversibly lost. Second, the second law is about energy loss in working bodies during heat engine cycles, not about the recycling of atoms in the biosphere. This logic used by Rifkin, however, likely stems from Georgescu-Roegen’s supposed fourth law of thermodynamics, that in a closed system, such as a human society, “material entropy must ultimately reach a maximum.” [8]

Other
Between 1997 and into 2009, a human thermodynamics education course based on Rifkin's book called "Entropy and Society" has been taught intermittently in the Physics Department at Ohio University by American physics professor Richard Piccard. [9]

“The [second law] is mute … when it comes to the vertical world of spiritual transcendence. The spiritual plane is not governed by the ironclad dictates of the entropy law. The spirit is a nonmaterial dimension where there are no boundaries and no fixed limits to attend to the relationship of the physical to the spiritual world is the relationship of a small part to the larger unbounded whole within which it unfolds. While the Entropy Law Helps govern the world of time, space, and matter, it is, in turn, governed by the primordial spiritual force that conceived it.”

Notes
The book was re-titled as a revised 1989 edition Entropy: Into the Greenhouse World, with an afterword by Romanian-born American mathematician and economist Nicholas Georgescu-Roegen. [2] Georgescu-Roegen, who is considered as Rifkin’s "prophet and teacher", as mentioned, is the main influence behind Rifkin’s theories. [3]