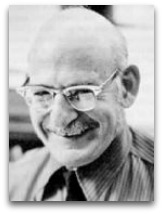 In hmolscience, Jerome Rothstein (1918-2002) was an American physicist noted for his 1952 to 1980s effort to explain free will and determinism in terms of loose thermodynamics ideas and information theory.

Overview
In 1952, began arguing for the equivalence of system “organization” and “negative entropy” of information theory. [1]

In 1964, Rothstein, in his article “Thermodynamics and Some Undecidable Physical Questions”, set out to answer questions on free will and determinism, origin and fate of the universe, and causes and purposes in nature via thermodynamics, specifically modeling people as automatons or well-informed heat engines, where he concludes that some of these admit answers, whereas others admit violations answers that entail violations of the second law. [2]

In 1979, Rothstein published his article “Generalized Life”, wherein uses thermodynamic arguments to conclude that life forms in the cosmos may exist as self-replicating, computer-controlled, heat engines able to play survival games, that we may not be able to recognize. [3] On the model of the Carnot engine, defined by Rothstein as follows:

he conceptualizes his so-called carbon chemistry animal machine model of a human as follows: 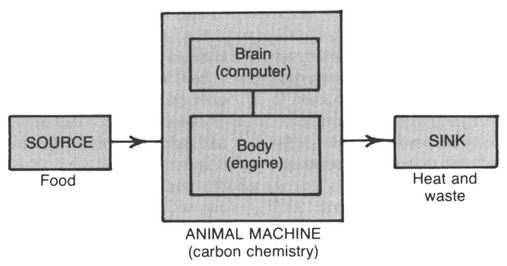 This model of course is interesting but error filled. Food stuff, at a given temperature, for example, is not the same as a boiler or hot body and excrement is not the same as condenser or cold body. Both of which, in any event, he says abides by the following three ABCs of thermodynamic "conditions":

“We have evolved from the world of simple molecules through dissipative structures to the more permanent entities that are living organisms. The further we go from the present, either into the past or the future, the greater the uncertainty. Darwin was right to dismiss thoughts about the origin of life; as Jerome Rothstein has said, the restrictions of the second law of thermodynamics prevent us from ever knowing about the beginning or end of the universe.”

Lovelock also cites Rothstein has having helped him conceptualizing his "living earth" theory better by comparing earth, with its "dead rock" composition, to a red oak, 99% of which is defined as dead wood.

Heat death and cold life
Rothstein has the following theory about evolution, life, and heat death: [3]

“I close with what seems to me to be a pleasing new insight of almost poetic beauty. It is that the gloomy heat-death of the universe, so often thought to be an inescapable consequence of the second law of thermodynamics need not follow at all. To paraphrase Mark Twain, I believe reports of the heat-death of the universe in X billion years are grossly exaggerated. As the universe cools, low-temperature forms of generalized life will be able to evolve. I believe it plausible that cold life will win over heat-death, that from the big bang on, there has been a succession of generalized life forms evolving, that they are still evolving, and that we share the cosmos with them.”

Education
Rothstein completed bachelor's degrees from the City College of New York and the Jewish Theological Seminary of America and a master's degree in 1940 in physics from Columbia University. From 1942 to 1957, he worked at the U.S. Army Research and Development Laboratories in the areas of solid state physics and physical electronics. In 1967, Rothstein joined the faculty of the Ohio State University as a professor of computer and information science and of biophysics.