In religio-mythology, Jesus crucified between two thieves refers to Roman recension rescript of an ancient pre-Christianity astro-mythology motif of the sun being reborn, on a cross, where the sun god, in question, refers either to Horus, as the morning sun, reborn at the vernal equinox, in the zodiac between the constellation gods Anubis (aka John the Baptist) and Aan (Ѻ) the baboon form of the moon god Thoth; Osiris-Ra, symbolic of light and justice, being reborn, in the form of the ankh, gripping two was scepters, representative of the darkness god Set, symbolic of darkness, evil, or injustice; or a later Roman rescript syncretism of both, in the form of joint monotheistic-stylized god Osiris-Horus, the forerunner to Jesus Christ.

Overview
In 1250BC, Egyptian scribes, in the Papyrus of Ani (Ѻ), depicted six baboons, shown below, symbolized by the god constellation Aan, as shown at the vernal equinox, in the Dendera Temple zodiac (75BC), above (middle), greeting the morning sun, shown in the form of the Ankh, above (left), being born out of Djed pillar or backbone of Osiris (aka Christmas tree): 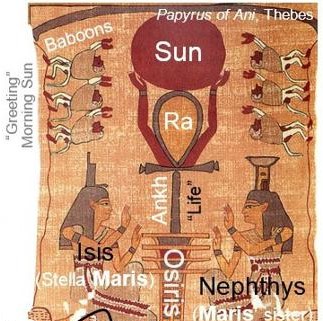 The Anubis zodiac symbol, shown in the Dendera Temple zodiac, at vernal equinox, top image (middle), is symbolic of the start of the annual Nile River flood, prior to the sun being reborn, aka baptism or John the Baptist in the Roman recension of Christianity.
Quotes
The following are related quotes:

“Two other lunar types were Anup [Anubis], the jackal, and Aan (Ѻ), the dog-headed ape. These two may be seen figured back to back at the place of the vernal equinox in the zodiac of Dendera. Each of the two had represented the dark half of the lunation (the one with Horus, the other with That [Thoth]) in two different stages of the mythos; each had been the thief of the light; the Mercury who was the thief personified. In these two thieves at the crossing we may perhaps identify the two thieves at the cross, as Mows, the solar lord of light in the moon—in the form of his hawk—is placed between or just over these two thieves at the crossing, the station of the cross! The birthplace of the god who was reborn or who rose again at the Vernal equinox is shown by the constellation of the Thigh or Uterus. Anup on one side of Horus, and Aan on the other, are the two thieves on either hand of the Kamite [Egyptian] Christ upon the cross at Easter.”

“Brugsch [c.1888] has suggested that this ape is a form of Thoth as the god of ‘equilibrium’, and that it elsewhere symbolizes the equinoxes.”

“The jackal of Anup and the cynocephalus of Taht-Aan, which figured as types of the dark lunation, were conceived as having stolen the light from the bright moon. As the dark period before and after the illumination, they stood on either side of the Christ light on the moon. They were dubbed ‘thieves of the light’, in contrast to the twelve solar characters who were guardians of the treasure of light. Hermes, cognate with Anup, was in Greek mythology the thief. In the zodiac of Dendera just where Horus is shown on the cross or at the crossing of the vernal equinox, these two thieves Anup and Aan are drawn on either side of the sun god. Here would appear to be the authentic pre-Christian prototype of the Gospel crucifixion between two thieves.”

“At the round zodiac at the Temple of Dendera, the perpendicular line to the temple axis runs through ‘Horus between the two thieves’ (Anubis and Aan) and represents the vernal equinox around 100 BCE.”

“Both Osiris and Horus, depending on the hours, would be the ‘crucified’ sun, as the sun crossing the sky, between the two thieves of sunset and sunrise.”