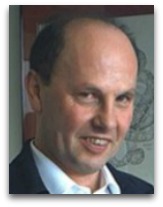 In existographies, Joel Janin (c.1941-) (CR:7) or “Joël Janin” (French), is a French bio-physicist (chnops-physicist) noted for his 1995 protein thermodynamics article “Elusive Affinities”, which opens and closes to a quote (P1:C4) and commentary, respectively, on the nature of German polymath Johann Goethe’s 1809 physical chemistry based novella Elective Affinities in respect to modern views on the thermodynamics aspects of specificity involved in protein-protein complex formation and disassociation: [1] 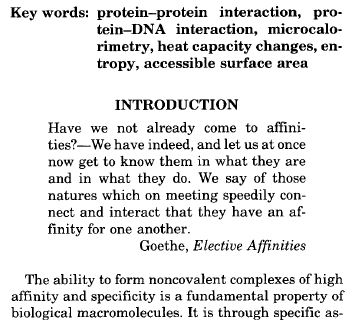 “Goethe's novel was an attempt to blend chemistry and human sciences. Two centuries later, it's still fun to read, and I was happy to quote his definition of affinity:

Have we not already come to affinities?-
We have indeed, and let us at once
now get to know them in what they are
and in what they do. We say of those
natures which on meeting speedily connect
and interact that they have an affinity
for one another.”

“I guess I generally agree with Frederick Rossini, though I see no chance to make a quantitative estimate of 'energy' and 'enthalpy' in social issues.”

This latter "no chance" comment by Janin here is a foray into the newly-emerging field of the development of human thermodynamic instrumentation, though ideas on how to go about calculating human energy, human entropy, human enthalpy, and human free energy have a long historical past, such as have been attempted in historical attempts at making human thermodynamics variable tables, a subject dating back to at least to American economist Irving Fisher's 1892 table.

Education
Janin completed his BS in solid state physics in 1964 at Ecole Normale Supérieure, Paris, and his PhD in 1969, initially under Cy Levinthal at MIT , where he learned molecular biology, then later in France, under Gif-sur-Yvette at the Pasteur Institute, then finally in enzymology under Georges Cohen at the University of Paris, with a dissertation on: “Aspartokinase I-homoserine dehydrogenase I of Escherichia coli K 12: the study of ligand binding and allosteric equilibrium”. Janin has been with protein studies ever since, initially via crystallography and the field of protein-protein interaction during a post-doc with David Blow at the MRC Laboratory of Molecular Biology (Cambridge, UK) in 1973-74. In 1981, Janin became a biophysics professor at Université Paris-Sud, Orsay, where he taught undergraduate biochemistry (chnops-chemistry) and structural biology, and managed the graduate program in enzymology. From 1992 to 2005 Janin was head of the CNRS Laboratoire de Biochimie et Enzymologie Structurales. Presently, Janin is professor emeritus of biophysics at the Yeast Structural Genomics Laboratory,Université Paris-Sud, Orsay. He has authored two textbooks (in French) and over 180 publications. [2]