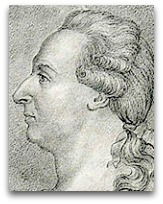 Overview
In c.1775, Wilcke, supposedly, was doing some type of calorimetry work.

Quotes | On
The following are quotes on Wilcke:

“Wilcke had, in the course of his investigations into latent heat, searched for the cooling effect which melted ice would have, he thought, upon the ice-cold water in which it was floating. Such cooling, ‘necessitated’ by the latent heat required to melt the ice, would amount to a flow of heat from a cold body to a hot body (the melting of ice).”

“Wilcke also noticed and reported similar phenomena, as that of Black, at about the same time. Wilcke saw that the final temperature of a mixture of hot water and snow was less than the mean between the temperature of the snow and the temperature of the water. Black and Wilcke, however, did not profit financially from their observations; Watt did.”
— Cathy Cobb (1995), Creations of Fire (pg. 217)