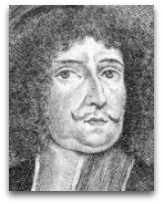 Overview
In 1682, Becher published A Mineral Alphabet of Twenty-Four Theses on Chemistry, his last work, in which he described some 1,500 chemical processes included one for making a philosopher's stone to turn lead into gold. [1]

Terra pinguis
In 1669, Becher, in his Subterranean Physics, proposed the existence of three new chemical principles or “earths”; one of them, terra pinguis, thought (Ѻ) of as a substance present in inflammable materials and given off during combustion; this is summarized as follows: [4] 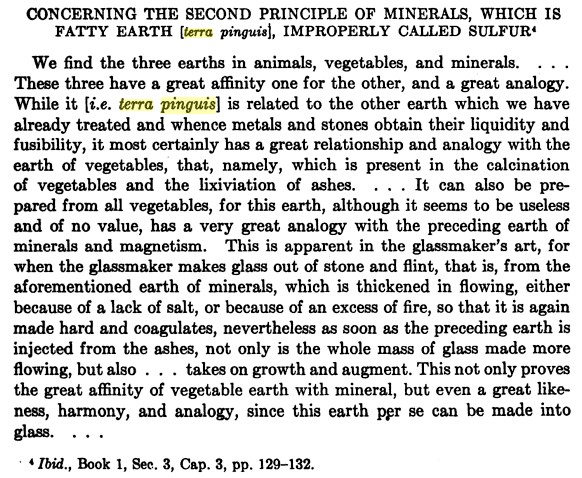 Becher, as summarized by Henry Leicester (1951), believed in the four element theory, of Aristotle, supposedly, and the three principles theory, of Paracelsus (namely: sulfur, mercury, and salt), with some modification.

Psychosophia
In 1687, Becher published Psychosophia, the 1725 edition title page image of which shown below, wherein he espoused some type autodidactic philosophy according to which he asserted that every person could learn all sciences by introspection and by knowing his own soul; his words, according to Roll, supposedly, are pompous, concerning his wide-ranging studies; therein asserting that his revolutionary ideas would remain unsurpassed for a hundred years. [3]

Education
In 1654, at age 19, Becher edited an alchemical tract, at age 26, he published a metallurgical chemistry book. [1]

Students
Becher’s terra pinguis theory was reformulated in 1703 into the “phlogiston theory of heat” by his student, German chemist Georg Stahl.

Quotes | On
The following are quotes on Becher:

“All solid sub-stances, according to Becher, consist of three types of earth: terra fluida is the mercurial element, which contributes fluidity and volatility; terra lapida is the solidifying element, which produces fusibility or the binding quality; and the third element is terra pinguis (literally 'fatty earth'), which gives material substance its oily and combustible qualities. This is the principle of inflammability. Terra pinguis worked as follows: a piece of wood originally consists of ash and terra pinguis; when the wood is burnt, the terra pinguis is released, leaving the ash. Becher's three elements are a recognizable development of the mercury, salt and sulphur theory proposed by Paracelsus and the alchemists. The notion of terra pinguis is not exactly original either. But the time was ripe for such an idea.”

“Chemists are a strange class of mortals, impelled by an almost insane impulse to seek their pleasure among smoke and vapor, soot and flame, poisons and poverty, yet among all these evils I seem to live so sweetly, that [I'd die before I'd] change places with the Persian King.”