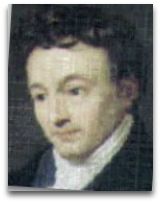 Education
Dobereiner, the son of a coachman and servant, had little formal education and little money for formal education. From age 15 to 17, Dobereiner worked as an apprentice at an apothecary named Lotz in Munchberg, after which he attended college lectures on chemistry, botany, and mineralogy, and studied on his own, but was unable to afford college.

In 1802, although now an apothecary, Döbereiner had neither the money nor license to buy a pharmacy. He opened an
agricultural produce business (Landesproduktenhandlung) and small chemical factory in the small town of Gefree near
Bayreuth, and he began to produce pharmaceutical-chemical preparations, publishing the reports of his experiments in the Neues allgemeines Journal der Chemie, edited by Adolph Ferdinand Gehlen (1775–1815). [8] It was Gehlen who later proposed his name for professor of chemistry at the University of Jena.

In 1810, Dobereiner became professor of chemistry at Jena, teaching there for thirty-nine years. Dobereiner's publications include Essays on Physical Chemistry (1824-36) and Principles of General Chemistry (1826, 3rd ed.). [6]

Ferments
In 1823, Dobereiner discovered that platinum sponge could cause the combustion of hydrogen and oxygen at room temperature, which was considered as a ‘ferment’ effect a precursor to the theory of catalysis and the 1835 term catalyst coined by Swedish chemist Jacob Berzelius. In short, what Dobereiner discovered was the property of spongiform platinum to inflame hydrogen. [6]

In the 1951 book Dobereiner, Goethe und die Katalyse, author Alwin Mittasch documents the exchange of letters between Goethe and Dobereiner who kept Goethe informed about the progress of his researches in chemistry. The book includes the letters in which he explained his results and Goethe’s replies. In a review of the book by American historian Henry Leicester, he explains that

Mittasch traces the concept of ‘ferments’, in the works of Goethe, who was ‘often incorporated chemical ideas into his writings’, arguing that Goethe in 1823, the age of 74, could not accept the new concept proposed to him by Dobereiner. [4]

It is argued that Dobereiner served as a model for the Captain in Goethe's 1809 Elective Affinities. [5] This, however, may by incorrect as Dobereiner was only 28 in 1808 the time of conception of Goethe's novella and still earliest date of association of Goethe with Dobereiner needs to be ascertained. Author Donald McDonald notes that in 1810 it was Goethe, then head Minister of the independent German state of Saxe-Weimar, who approved the appointment of Dobereiner as professor of chemistry at the University of Jena, after which Dobereiner became Goethe's chemical assistant. [7] American chemist George Kauffman states that Dobereiner first met Goethe on September 08, 1810 at Weimar. [8] The two then had a close interrelationship in years to follow, Goethe attending his lectures, reading his textbooks, studying his stoichiometry, funding his researching, designing and building his laboratories, etc., and Dobereiner reporting all his experimental finds to Goethe, conducting chemical research for him, e.g. searching for experimental chemical support of Goethe's color theory, etc. [8]