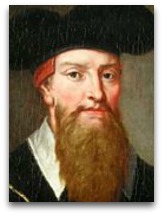 In existographies, Johann Faust (c.1485-c.1540) (IQ:#|#) (CR:6), commonly known as "Dr. Faustus", was a German physician, enchanter, and chemist, and eponym of the "Faust legend", Faustian, Faustian quest, etc., described by Johann Spies (1587), as someone whose crime was that he “took the eagle’s wings, and wished to investigate all the depths of heaven and earth”, owing to his insatiable desire for knowledge; or, as later expanded and or elaborated on by Georg Widman (1599), someone lured into magic by his desire for worldly enjoyments. [1]

Overview
Johann Faustus was born in Roda in the province of Weimar, of god-fearing parents. Although he often lacked common sense and understanding, at an early age he proved himself a scholar, mastering not only the Holy Scriptures, but also the sciences of medicine, mathematics, astrology, sorcery, prophesy, and necromancy. [1]

Pact
In c.1520, Faust began to become renowned for the so-called "Faust legend". So the story goes, his pursuits for knowledge aroused in him a desire to commune with the Devil, so—having made the necessary evil preparations—he repaired one night to a crossroads in the Spesser Forest near Wittenberg. Between nine and ten o'clock he described certain circles with his staff and thus conjured up the Devil. Feigning anger at having been summoned against his will, the Devil arrived in the midst of a great storm. After the winds and lightning had subsided the Devil asked Dr. Faustus to reveal his will, to which the scholar replied that he was willing to enter into a pact. The Devil, for his part, would agree: [1]

The Devil agreed to these particulars, on the condition that Dr. Faustus would promise:

Having reached an agreement, the pact was drawn up, and Dr. Faustus formalized it with his own blood.

Faust's barrel ride | Goethe
In 1525, Dr. Heinrich Stromer, aka Dr. Auerbach (a reference to his birthplace in Germany’s Upper Palatinate region), a professor of medicine, opened an underground wine bar called Auerbachs Keller, in Leipzig. The bar soon became associated with the legend of a scholar named Dr. Johannes Faust, a patron of the bar, someone who had grown bored with life, made a pact with the Devil through the Horned One’s representative, Mephistopheles (aka Mephisto). The Devil agreed to give Dr. Faust access to unlimited knowledge and worldly pleasures—but only for the next 24 years (one year for every hour in the day). At the end of the contract term, the scholar would be required to hand over his soul to the Devil.

To convince Dr. Faust of the plan’s merit, Mephisto invited him to an evening of revelry in the underground wine bar of the Auerbachs Keller. At the end of the night, the scholar rode up the stairs on the back of a barrel in a gravity-defying feat of devilish fun.

On the tavern’s 100th anniversary in 1625, two paintings were mounted on the wall, one depicting Faust and Mephisto drinking with students and the other showing Faust riding the barrel.

In the 1770s, the Auerbachs Keller had become a well-established hangout for Leipzig University students, and one regular patron went on to become one of Germany’s leading literary figures: Johann Goethe. Inspired by the legend during his student days—and perhaps after staring at the paintings of Faust and Mephisto through a wine-induced haze—Goethe later wrote a tragic play titled Faust. He set one scene in his old hangout, where Mephisto and Faust join a group of students in a night of drinking until the revelry turns violent. The Devil’s agent casts a spell on the students, who watch Faust riding out of the tavern on his legendary barrel. [2]

Times
Henceforth, following his pact with the devil, Dr. Faustus' life was filled with comfort and luxury, but marked by excess and perversion. Everything was within his grasp: elegant clothing, fine wines, sumptuous food, beautiful women—even Helen of Troy and the concubines from the Turkish sultan's harem. He became the most famous astrologer in the land, for his horoscopes never failed. No longer limited by earthly constraints, he traveled from the depths of hell to the most distant stars. He amazed his students and fellow scholars with his knowledge of heaven and earth. However, for all his fame and fortune, Dr. Faustus could not revoke the twenty-four year limit to the Devil's indenture. Finally recognizing the folly of his ways, he grew ever more melancholy. He bequeathed his worldly goods to his young apprentice, a student named Christoph Wagner from the University of Wittenberg. [1]

End
Shortly after midnight on the last day of the twenty-fourth year, the students who had assembled at the home of the ailing Dr. Faustus heard a great commotion. First came the sound of a ferocious storm and then the shouts—first terrifyingly loud then ever weaker—from their mentor. At daybreak they ventured into his room. Bloodstains were everywhere. Bits of brain clung to the walls. Here they discovered an eye, and there a few teeth. Outside they found the corpse, its members still twitching, lying on a manure pile. [1]

Quotes | On
The following are quotes on Faust: