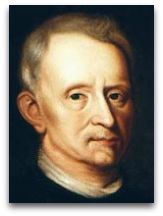 Soul
In 1648, Helmont, in his Ortus Medicinae, situated the “archeus” or soul, part of the world soul, in the upper opening of the stomach (Thomson, 1996); Mettrie later cited him as situating the soul in the pylorus:

“One could say at times that the soul is to be found in our stomach and that when van Helmont placed its seat in the pylorus, his only mistake was to take the part for the whole.”

Gas | Oak experiment
In c.1615, Helmont is said to have introduced the word “gas” as a type of spirit that can be reduced to liquid form and can, if produced, cause glass containing vessels to explode. [1] Helmont likely derived the term from the Greek khaos (chaos) meaning void or "empty space", being that the Dutch "g" is roughly equivalent to that of Greek "kh."

The word was gas was introduced by Helmont in an experiment where he burned 62 pounds of oak after which time only one pound of ash remained. Thus, he concluded that 61-pounds (or 98%) of the material was converted into a new type of invisible air or spirit, to which he affixed the name “gas”. Specifically, in his writings, Helmont states: [2]

“The flame which is only burning smoke, perishes at once in a closed vessel, and charcoal may be heated continuously in a closed vessel without wasting … yet it 62-pounds of oak charcoal contain 1-pound of ashes, the remaining 61-pounds are “wild spirit” (spiritus silvestre), which cannot escape from the shut vessel.”

“I call this spirit, hitherto unknown, by the new name of gas (Hunc spiritum, incognitum hactenus, novo nomine Gas voco), which can neither be retained in vessels nor reduced to a visible form, unless the seed is first extinguised. But bodies do contain this spirit, and do sometimes wholly depart into such a spirit, not indeed, because it is actually in those very bodies (for truly it could not be detained, yea the whole composed body should I lie away at once) but it is a spirit grown together, coagulated after the manner of a body, and is stirred up by an attained ferment, as in wine, the juice of unripe grapes, bread, hydromel or water and honey. ”

More than once, Helmont concluded that he was the “inventor” of gas. He investigated and categorized a number of gases, such as gas from eructions (belches) or CO2, poisonous red gas (NO2) that is formed when aqua fortis (HNO3) acts on silver, sulfurous gas that “flies off” burning sulfur, and others. He says that gas is composed of invisible atoms which can come together by intense cold and condense to minute liquid drops; and that gases can be contained in bodies in fixed form, and set free again by heat, fermentation, or chemical reaction. [2] In relation to combustion, he concluded that there were two classes of gas: [3]

His research was published posthumously in Ortus Medicinae (1648) and is one of the first examples of the use of the "scientific method". Earlier variants of this growing experiment were, supposedly, done by the Greeks and Da Vinci did a similar unpublished experiment with pumpkins. (Ѻ)

Quotes | On
The following are noted about quotes:

“And when with excellent microscopes I discern in otherwise invisible objects the inimitable subtlety of nature’s curious workmanship; and when, in a word, by the help of anatomical knives, and the light of chemical furnaces, I study the ‘book of nature’, and consult the glosses of Aristotle, Epicurus, Paracelsus, Harvey, Helmont, and other learned expositors of that instructive volume; I find myself oftentimes reduced to exclaim with the psalmist, how manifold are thy works, O Lord? In wisdom hast thou made them all.”

“That all plants immediately and substantially stem from the element water alone I have learned from the following experiment. I took an earthern vessel in which I placed two hundred pounds of earth dried in an oven, and watered with rain water. I planted in it a willow tree weighing five pounds. Five years later it had developed a tree weighing one hundred and sixty-nine pounds and about three ounces. Nothing but rain (or distilled water) had been added. The large vessel was placed in earth and covered by an iron lid with a tin-surface that was pierced with many holes. I have not weighed the leaves that came off in the four autumn seasons. Finally I dried the earth in the vessel again and found the same two hundred pounds of it diminished by about two ounces. Hence one hundred and sixty-four pounds of wood, bark and roots had come up from water alone.”