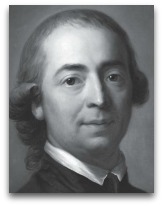 Overview
Herder is noted for his evolution theory of language, and for being a comrade to Goethe, whom, it seems, Goethe looked up to in some ways; such as evidenced in his 1770 intercourse with him about the Faust play (see: Faustian); also Herder was the person to whom Goethe wrote in 1784 that he had found morphological evidence of human evolution (discovered the human intermaxillary bone), of humans and lower animals being related; a date which, according to Darwin, marks the start of evolution theory. [1]

Quotes | On
The following are quotes on Herder:

“Robinet, though not the originator, was, so far as I know, the first elaborated and enthusiastic champion of the notion of the Urbild, upon which all organic and perhaps all natural forms are variations, which was to be taken up by Herder and to become an almost obsession of Goethe at one period.”

“It is really astonishing, that this fine passage (Joshua 10:6-14) has been so long misunderstood. We are expressly told that it is an extract from the Book of Jasher—a collection of poems on the heroic deeds of leaders of the Israelites.”