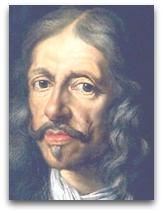 Overview
In 1627, Hevelius, age 16, began to study under mathematician, astronomer, and purported polymath (Ѻ) Peter Kruger (1580-1639), himself a student (Ѻ) of Tycho Brahe and Johannes Kepler.

In 1639, Hevelius re-visited Kruger, who convinced him to engage fully in astronomy, after which he established an observatory, which he called “Stellaburgum”, on the roof of his Danzig home, which eventually grew to cover three adjacent buildings. The following shows Hevelius using some type of projection telescope which showed a night sky image on a sheet of paper, enabling it to be drawn, which was used in observation of the transit of Mercury on 3 May 1661: [2] 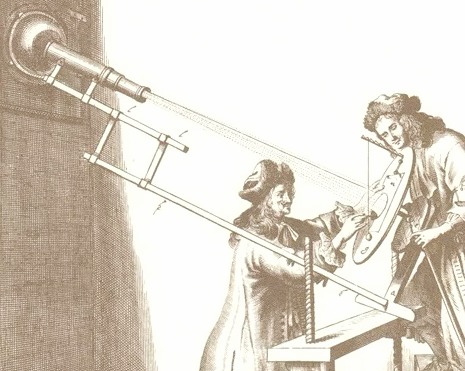 Hooke
In 1668 to 1674, Hevelius did battle with Robert Hooke as to who could build superior astronomical instruments, i.e. quadrants and telescopes. [1]

Quotes | On
The following are quotes on Hevelius:

“Nothing is sweeter than to know everything, and enthusiasm for all good arts brings, some time or other, excellent rewards.”

“Comets had fascinated astronomers for thousands of years, and Hooke set about reading what had been written about them from Aristotle and Seneca to Kepler, Galileo and Hevelius.”