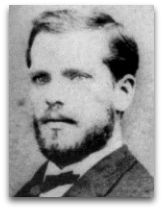 In thermodynamics, Johannes van der Waals (1837-1923) was a Dutch physical chemist noted for his 1873 derivation of the equation of state for condensing bodies when approaching the liquid state and for his theory of dispersion forces; work for which he won the 1910 Nobel Prize in physics. [1] Van der Waals is associated with the Dutch school of thermodynamics. In his explaining how he arrived at his equation of state, he states: [2]

“The first incentive to this my life’s work came to me when, after my studies at university, I learned of a treatise by Clausius (1857) on the nature of the motion which we call heat … [in which] he showed how Boyle’s law can very readily be derived on the assumption that a gas consists of material points which move at high velocity, that this velocity is of the order of that of sound and increases in proportion to the square root of the absolute temperature.”

Overview
As noted, early in his studies in physics and mathematics, Van der Waals was greatly influenced by Clausius’ 1857 treatise On the Kind of Motion we Call Heat. [2] Van der Waals was later influenced also by the writings of James Maxwell, Ludwig Boltzmann, and Willard Gibbs.

Van der Waals' 1873 doctoral thesis, completed at University, was entitled On the Continuity of the Gas and Liquid State. [3] In this work, for which he would be later awarded the 1910 Nobel prize in physics, he derived the equation of state bearing his name, which describes the behavior of condensing gases and criticality; introduced the concepts of molecular volume and molecular attraction (presently known as the Van der Waals force); overall thus giving a model in which the liquid and the gas phase of a substance merge into each other in a continuous manner.

In deriving his equation of state van der Waals assumed not only the existence of molecules (which in physics was disputed at the time), but also that they are of finite size and attract each other. As he wrote in his memoirs later he was afraid he would not pass his PhD exam since at that time people in science did not believe on the existence of atoms and molecules.

In 1864, German physicist Rudolf Clausius began to write the ideal gas law as:

where p is the pressure, v the volume, and T the absolute temperature of the body of non-interactive gas particles. In systems where either the pressure is increased, volume decreased, or temperature decreased, the gas can be turned into a liquid state, and the above equation becomes inapplicable. The system will be become a non-dilute aggregate of moving particles, interacting through inter-particle forces, and will fail to comply with Boyle’s law. These two effects, according to Van der Waals, can attributed to attraction between the particles, signified by a new constant “a”, and particle volume effects, signified by a new constant “b”, and thus the new vapor-approaching-liquid state of the body of particles can thus be quantified by the following equation:

in its original formulation. [2]

“There can be no doubt that the name of Van der Waals will soon be among the foremost in molecular science.”