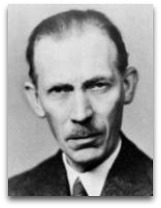 In thermodynamics, Johannes Bronsted (1879-1947) was a Danish chemical engineer and physical chemist known in chemistry for his Bronsted acid-base theory (Ѻ), and noted for his 1946 Principles and Problems in Energetics, in which he outlined what seems to have been one of the first overviews of a work principle to the organization of the varieties of the conjugate variable pairs that characterize systems.

Work principle
In his 1946 monograph, Bronsted summarized the main topics in thermodynamics in terms of energetics in what he called the “work principle”. In particular, he stated that the overall work ∆W performed by a system is the sum of contributions due to transport of extensive quantities ∆Ki across a difference of "conjugated potentials" Pi1 - Pi2:

Free energy
Bronsted is also said to have said to have done some of first work, following Fritz Haber, in measuring and calculating free energy tables or quantifications of chemical reactions. [2]