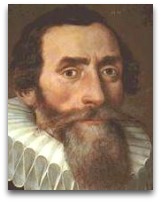 Kepler | Vulgar Era | CE
In c.1590, Johannes Kepler, age 19, was a student at the Lutheran-themed University of Tubingen, in Baden-Wurttemberg, Germany, where under Michael Maestlin (Ѻ), a German astronomer and mathematician, he learned both the Ptolemaic system and the Copernican system, during which time he became a Copernican.

In 1554, Kepler applied for a teaching position at Tubingen University, but in order to get the job, he had to appear before the theological faculty to test his adherence to Lutheran beliefs, but because he believed now believed in “heliocentric theory”, which had been condemned or categorized by Martin Luther in 1539 as “table talks”, he was barred from the position.

In Apr 1554, Kepler, rejected from his first choice, accepted a position of teacher of mathematics and astronomy at a Protestant school in Graz, Austria.

In 1599, the local Catholic Duke, decided to drive out all Lutherans from Graz, during which point Kepler almost lost his job, but was saved by some Jesuit priests, who had been interested in his astronomical ideas, who begged the Duke to let him stay.

In 1601, an opportunity arose for Kepler to go work with Tycho Brahe in Prague, Czech Republic.

In 1612, Kepler, move from Prague to Linz, Austria, where he taught astrology and astronomy at a district school, during which time he was excluded from Eucharist, owing to his astronomy-conflicting theology

In 1613, Kepler was excommunicated from the church because he believed that the moon was a solid body, which contradicted with Lutheran theologians who said that said that, according to the Bible, the moon is “lesser light to rule the night”, and hence was “light” and not a solid body. [7]

In 1613, Kepler published On the Year (De Vero Anno), an expanded treatise on the year of Christ’s birth.

This year he also participated deliberations on whether to introduce Pope Gregory's reformed calendar to Protestant German lands.

In 1613, Kepler penned New Stereometrics on Wine Barrel Dimensions (Nova Stereometria Doliorum Vinariorum) (Ѻ) a mathematical treatise on measuring the volume of containers such as wine barrels; which was published in 1615 (AD), the preface of which is dated by him as 1613 ACO, the abbreviation ACO meaning “Year of Western Christianity”, or something along these lines, or in the original Latin “Anno Christianorum Occidentalium M. DC. XIII”, where “M. DC. XIII” means 1000 + 600 + 13.

In 1615, Kepler’s mother Katharina Kepler (1546-1622) (Ѻ), then residing in the Protestant town of Leonberg, was arrested for and tried for “witchcraft”, along with 15 other women, 8 of whom were executed. She eventually was imprisoned, in the summer of 1620, for fourteen months. [8]

In 1615, Kepler, in his Mathematical Pastoral Chronology (Mathematici Eclogae Chronicae), a book of assembled correspondence with Seth Calvisius, Markus Gerstenberger, Johannes Deckers, and Herwart Hohemberg, on various chronological questions related to the time of Christ, which opens to the following table of contents:


The term Annus Aerae Nostrae Vulgaris, or “Annus [year] Aerae [era] Nostrae [of] Vulgaris [vulgar or popular]”, translates as Year of the Vulgar Era, or 1615 “VE” (vulgar era) in short. This “VE”, supposedly, by 1708, in English, became the forerunner to “common era” (CE), as found in the secular dating of BCE/CE used presently. [9]

The dating of Kepler's book seems to be the following: 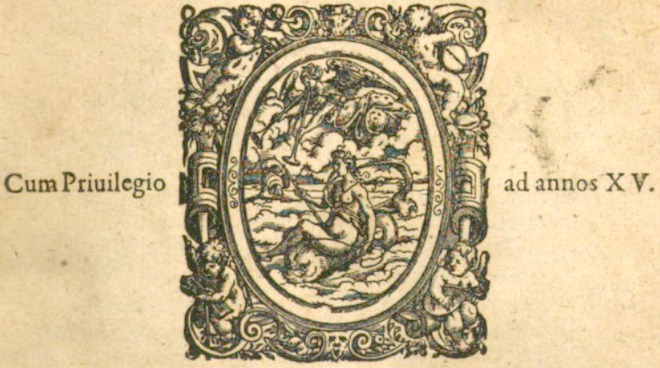 Overview
In 1596, Kepler published The Cosmic Mystery: the Secret of the World, rejected the Ptolemaic model in favor of the Copernican model, the first publication to do so in the 53-years since publication of On the Revolution of the Heavenly Spheres; Kepler explains as follows:

“When I was studying under the distinguished Michael Maestlin at Tubingen six year ago, seeing the many inconveniences of the commonly accepted theory of the universe, I became delighted with Copernicus, whom Maestlin often mentioned in his lectures, that I often defended his opinions in the students’ debates about physics. I have by degrees – partly out of hearing Maestlin, partly by myself – collected all the advantages that Copernicus has over Ptolemy.”

Kepler, age 25, sent copies of this out to Galileo, age 32, who replied as follows:

“Many years ago, I accepted Copernicus’ theory, and from that point of view I discovered the reasons for numerous natural phenomena which unquestionably cannot be explained by the conventional cosmology. I have written down many arguments as well as refutations of objections. These, however, I have not dared to publish up to now. For I am thoroughly frightened by what happened to our master, Copernicus. Although he won immortal fame among some persons, nevertheless among countless – for so large is the number of fools – he became a target of ridicule and derision. I would of course have the courage to make my thoughts public, if there were more people like you. But since there aren’t, I shall avoid this kind of activity.”

In 1599, Kepler moved to Prague, so to study under Brahe.

Angels | Planetary motion
Kepler, supposedly, had some sort of theological foundation in mindset in the conceptual underpinnings of his celestial mechanics. [4] Somehow in this mix, Kepler is often cited as having asserted himself that planetary motion was driven by angels pushing them about the sun, having entertained this premise for a spell, or that people in his day believed and or asserted this argument; the following are a few example statements:

“The search for cause and effect, the striving to reduce everything to law and order, the explanation of the universe in terms of machine—all this Pavlov carried over from Kelvin, Maxwell and Helmholtz. But in physics, causality, machines, law and order have disappeared. Schrodinger even regards them as infantile concepts—as infantile as Kepler’s hypothesis that angels push the planets around the sun.”

“Our sixteenth-century Fernel viewed the body as a tenement for faculties. One faculty was that which actuated the various bodily movements. Then came Descartes with is robot [see: Cartesian automata], a mechanism actuating itself. Such too had been Descartes’ thought with respect to the motions of the macrocosm. For Kepler still, a century later than Fernel, though each planet was ridden by an angel. Then later with the ‘reign of law’ that guidance became a ‘force’, e.g. gravitational. Today that ‘force’ has in turn disappeared. There remains a curvature of space. The human mind looking at nature has had to dehumanize its point of view—it has, using Samuel Alexander’s word, to ‘deanthropize' itself. It has to dispense with ‘causation’, which is regarded as an anthropism, but is yet a final cause. It is more faithful to William of Occam.”

“What makes planets go around the sun? At the time of Kepler some people were saying that there were angles behind them beating their wings and pushing the planets around in orbit. As you will see, the answer is not very far from the truth. The only direction is that the angles sit in a different direction and their wings push inwards.”

“When Kepler began to wonder why the planets move as they do, for a while he entertained the then-popular notion that planets were pushed by angels. After all, planetary motion had been found to be quite lawful and regular, yet there was no obvious agent to give them a push, as Aristotelian physics required. But Kepler did not leave it there, he wanted to know more about ‘how’ the process worked, and after considering and discarding many hypotheses over many years (some of them fantastical and mystical), he finally stripped away the supernatural notions and worked out his three purely mathematical laws of planetary motion.”

Education
Kepler was a recognized prodigy of sorts, completing his MS degree at age 20 at the University of Tubingen, where he studied under Michael Maestlin (1550-1631), who had begun teaching Copernican theory, informally.

Quotes | On
The following are noted quotes of praise and or tributes:

“Give me a fruitful error any time, full of seeds, bursting with its own corrections. You can keep your sterile truths for yourself.”

“Einstein is a genius in higher physics and ranks with Copernicus, Newton and Kepler.”

“The chief aim of all investigations of the external world should be to discover the rational order which has been imposed on it by god, and which he revealed to us in the language of mathematics.”

“If a person be too dull-witted to comprehend his knowledge or to enfeebled by his wounded piety to believe Copernicus, I encourage him to dismiss the school of astronomers and, if he wishes, even those among the condemned philosophers he favors, and pursue his own interest and cease his earthly wanderings.”

“And I cherish more than anything else the ‘analogies’, my most trustworthy masters. They know all the secrets of nature, and they ought to be least neglected in geometry.”