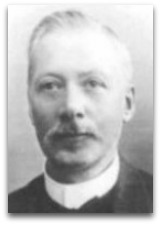 Van Laar is often classified as being part of the Dutch school of thermodynamics. [2]

In 1896, he engaged with a heated debate with Walther Nernst; and continued on with his attack on “osmotics” for over ten years. [1]

Education
Both of van Laar’s parents dereacted (died; ended) before he was thirteen (mother at two; father at thirteen), thus situating him, curiously, in the early parental death categorization. After becoming a naval officer, at the behest of his guardians, from 1881 to 1884 he began to study chemistry, physics, and mathematics, attending the lectures of Jacobus van’t Hoff and Johannes van der Waals. In 1893, he wrote his first book The Thermodynamics of Chemistry. In 1898, he began tutoring in mathematical chemistry at the University of Amsterdam. In 1903, he became an assistant to Dutch chemist Bakhuis Roozeboom. He resigned for health reasons in 1912, and moved to Switzerland. [3]