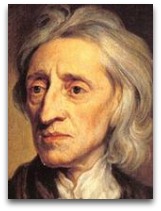 Newton's circle
Locke, when he studied at Oxford, became friends with Isaac Newton and Robert Boyle, friendships that lasted their entire existences. [3]

Atomic theory
Locke, supposedly, was a deism-based Christian atomist, and accordingly rejected the notion that “things entirely devoid of knowledge, acting blindly, could produce a being endowed with awareness.” [1] Locke, supposedly, adopted many Epicurean tenants from the translations of Epicurus done by Pierre Gassendi. (Ѻ)

Tabula rasa | Mind
In 1690, Locke, in his Essay Concerning Human Understanding, supposedly, made the first serious attempt to explain the functioning of the mind in purely naturalistic terms, without the need for divine intervention in the development of reason; every human, he posited, comes into the world with his or her mind as a blank slate or tabula rasa; over time, according to Locke, the child absorbs experiences though the senses and then organizes these experiences the processes of association (Ѻ) The mind is born "blank", according to Locke, and all knowledge, ideas, images come from sense and experience. [3] Some of this blank mind conjecture, to note, has been disproved in the beauty vs ugly studies of newborn babies, who will turn towards or gaze at longer so-deemed "beautiful" faces longer than as compared to so-deemed "ugly" faces, prior to having any sense experience.

Locke, along with John Mill, was influential to Leon Walras and the development of the Lausanne school of physical economics.

Quotes | On
The following are noted quotes of tribute and or praise:

“How has it happened, that the profound Locke, who, to the great mortification of the metaphysicians, has placed this principle of Aristotle—that nothing enters the mind of man, but through the senses—in the clearest point of view; how is it that all those who, like him, have recognized the absurdity of the system of innate ideas, have not drawn the immediate and necessary consequences? How has it come to pass, that they have not had sufficient courage to apply so clear a principle to all those fanciful chimeras with which the human mind has for such a length of time been so vainly occupied?

“Bacon, Locke, and Newton are the three greatest men that have ever lived, without any exception.”

“Voltaire’s letter on Locke from the Philosophical Letters (1734), which circulated separately as a ‘Letter on the Soul’, which La Mettrie had read, [touched on] Locke’s hypothesis that god might ‘superadd to matter a faculty of thinking’, which gave rise to great controversy in Britain concerning materialism and the nature of the soul.”

Quotes | By
The following are noted quotes by Locke:

“There cannot be any one moral rule proposed, whereof a man may not justly demand a reason.”

“In all the visible corporeal world we see no chasms or gaps. All quite down from us the descent is by easy steps, and a continued series that in each remove differ very little one from the other. There are fishes that have wings and are not strangers to the airy region; and there are some birds that are inhabitants of the water, whose blood is as cold as fishes. There are animals so near of kin both to birds and beasts that they are in the middle between both. Amphibious animals link the terrestrial and aquatic together; . . . not to mention what is confidently reported of mermaids or sea-men. There are some brutes that seem to have as much reason and knowledge as some that are called men; and the animal and vegetable kingdoms are so nearly joined, that if you will take the lowest of one and the highest of the other, there will scarce be perceived any great difference between them; and so on until we come to the lowest and the most unorganical parts of matter, we shall find everywhere that the several species are linked together, and differ but in almost insensible degrees.”

“I greatly esteem all those who faithfully defend their opinion; but there are so few persons who after the manner they do defend them, appear fully convinced of the opinions they profess, that I am tempted to believe there are more sceptics in the world than are generally imagined.”

“The actions of men the best interpreters of their thoughts.”

“Heat is a very brisk agitation of the sensible parts of the object, so that what in our sensation is heat in the object is nothing but motion.”

References
1. (a) Pullman, Bernard. (1995). The Atom in the History of Human Thought (translator: Axel Reisinger) (pgs. 144-45). Oxford University Press, 1998.
(b) Stenger, Victor J. (2013). God and the Atom: from Democritus to the Higgs Boson: the Story of a Triumphant Idea (pg. 76). Prometheus Books.
2. Jefferson, Thomas. (1789). “The Three Greatest Men: Letter to John Trumbull”, Feb 15, Library of Congress.
3. Hecht, Jennifer M. (2003). Doubt: A History: The Great Doubters and Their Legacy of Innovation from Socrates and Jesus to Thomas (pg. 334). HarperOne.
4. (a) Yolton, John. (1983). Thinking Matter: Materialism in Eighteenth-Century Britain. University of Minnesota Press.
(b) La Mettrie, Julien. (1751). Machine Man and Other Writings: Treatise on the Soul, Man as Plant, The System of Epicurus, Anti-Seneca or the Sovereign Good, Preliminary Discourse (translator and editor: Ann Thomson) (pg. xii). Cambridge University Press, 1996.