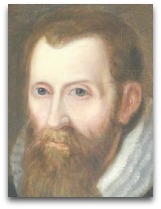 Quotes | On
The following are quotes on Napier:

“John Napier, strict Protestant and Scottish laird, invented logarithms about 1594 and published his table in 1614. Henry Briggs (1561-1630), friend and disciple of Napier and first professor of mathematics at Gresham College, set them upon a base of 10. The logarithm of a given number is the number of times the base must be multiplied by itself to raise it to the given number. Thus 3 is the logarithm of 1,000 (10 X 10 x 10) in the common or Briggs system. William Oughtred (1574-1660), clergyman in the English Church, a "pittyful preacher" but very much of a mathematician, applied logarithms about 1622 to the invention of a mechanically crude slide rule, making it possible by mechanical addition and subtraction to multiply and divide. Oughtred also taught Christopher Wren, architect of St. Paul's, and wrote books which Isaac Newton studied.”