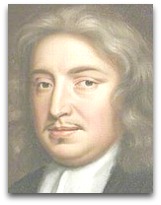 Overview
In 1640, Wilkins, in his Discovery of a New World, argued, supposedly, that gravitational attraction was similar to magnetism, as William Gilbert (1600) had argued, but a “different force” of some sort. [1]

In 1648, Wilkins, in his Mathematical Magic, gave an account of heat powered automata; the first of which being:

“That musical instrument invented by Cornelis Drebbel, which being set in the sun shine, would of itself render a soft and pleasant harmony, but being removed into the shade would presently become silent. The reason was this, the warmth of the sun, working upon some moisture within it, and rarifying the inward air unto so great an extension, that it must needs seek for a vent or issue, did thereby give several motions unto the instrument.”

Then spoke about the aeolipile, supposedly reminiscent of Giovanni Branca’s device (1629), and Cardano's smoke jack, and gives the following illustration: 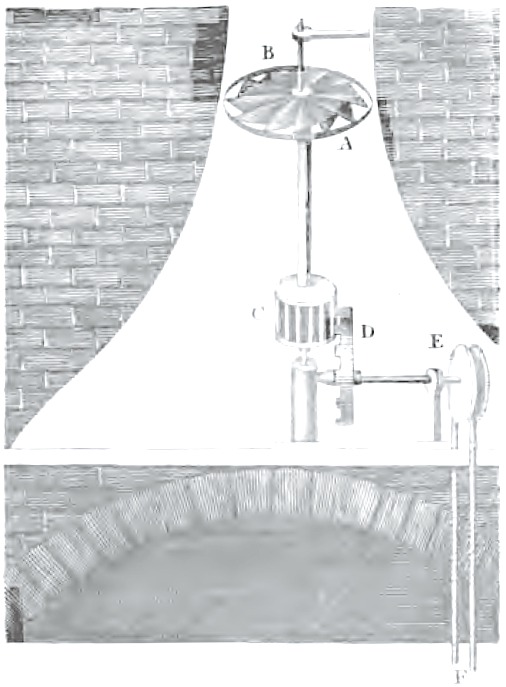 This device operates such that the heat rising in the chimney turns blades AB, which then turns gears CD, which turns pulley E, which thus connects to rope F, which can be put to work for some practical purpose. Leonardo da Vinci, supposedly, was the first to sketch a smoke jack (Ѻ) of this type. Wilkins says these have been frequently used for the exciting and contracting of heat in the melting of glasses or metals, and that they may be contrived for other pleasant uses, such as the moving of sails in a chimney corner or the turning of a spit. [2]
In 1668, Wilkins, in his Essay towards a Real Character, and a Philosophical Language, proposed a new universal language, and upgrade to the Latin language standard, be made so to facilitate communication, in scientific circles, among different countries; he also proposed, supposedly, that a new integrated system of measurements, akin to the modern metric system.

In Aug-Sep 1665, Wilkins and Robert Hooke, at the Banstead Downs (Ѻ) chalk wells, which are 315 feet deep, weighed objects on the surface of the earth and the bottom of the wells, to test Henry Power’s reports that objects weigh less at depths, but their measurements failed to confirm Power’s findings. [1]

Quotes | By
The following are quotes by Wilkins:

“Obscurity in writing is commonly an argument of darkness in the mind. The greatest learning is to be seen in the greatest plainness.”

“Man’s natural desire for happiness is as certain as the descent of heavy bodies.”