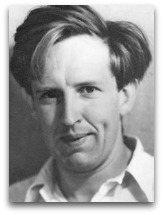 In hmolscience, John Bernal (1901-1971) (CR:6), often cited as J.D. Bernal, was an Irish-born English physicist noted, in animate thermodynamics, for his 1949 introduction of the term "biopoesis", referring to a hypothetical three-step origin of life process, and for his 1951 physical theory of the origin of life.

In 1951, Bernal, in his The Physical Basis of Life, outlined the following theory: [1]

“Life is one member of a class of phenomena which are open or continuous reaction systems able to decrease their internal entropy at the expense of free energy taken in from the environment and subsequently rejected in degraded form.”

Hungarian-born American physicist Eugene Wigner (1961), supposedly, expressed a similar view. [2] Bernal's chemical thermodynamic definition of life has been cited by those including: James Lovelock and Lynn Margulis, among others. [3]

Bernal, according to some accounts, is a said-to-be “two-cultures” genius. [4]

Eobiont
Bernal, at some point, seems to have either coined and or adopted the term “eobiont”, a conjunction of eo- [earliest / oldest] + -bio [life] + -nt [?], meaning “hypothetical precursor of living organisms in the chemical evolution preceding the occurrence of life”. [5]

Note, however, that other sources credit the coining of “eobiont” to British biochemist and “dogmatic atheist” Norman Pirie (1907-1997); supposedly, and equivalent to Soviet biochemist Alexander Oparin’s protobiont. [6] Pirie’s coining of the term was such that he used it to designate the entire process of development from the evolution of organic out of inorganic compounds, including the production of the first protoliving creature or "eobiont”. (Ѻ)