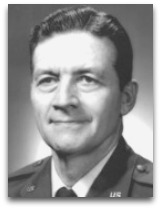 In existographies, John Boyd (1927-1997) (CR:12) was an American industrial engineer, combat pilot, and military strategist noted, in war thermodynamics, for his energy-entropy decision based reaction cycle model of combat operation processes, or OODA loop (short for observe, orient, decide, and act) model, which he consulted the pentagon on, in over 1500 briefings, over a period of about 30 years. Boyd mixed in ideas on Heisenberg’s uncertainty principle and chaos theory into his model.

Boyd seems to have been well read in general human thermodynamics authors; his 1976 Destruction and Creation, for example, cites: Erich Fromm, Nicholas Georgescu, Werner Heisenberg (Physics and Philosophy, 1962), David Layzer (“The Arrow of Time”, 1975), Michael Polanyi (Knowing and Being, 1969), Thomas Kuhn, among others.

Education
In 1944, as a high school junior, Boyd enrolled in the US army and served two years. In 1947, he entered the University of Iowa to study economics, graduating four years later. [1] In 1951, he became a US air force officer, completing his pilot training at Williams Air Force Base. In 1953, he flew 22 combat sorties in the F-86 Sabre during the Korean War.

In 1954, he attended the Fighter Weapons School Instructor Course, at Nellis Air Force Base, Nevada, remaining there as a fighter weapons and tactics instructor. During this period, Boyd began to focus on “air combat tactics”, publishing several articles on this, including his famous 147-page Aerial Attack Study, detailing every maneuver possible, in words and graphic illustrations, for a pilot to use in a dog fight. The problem that intrigued him during his period was that despite flying in an F-86 aircraft, which had a lower ceiling, a wider turn radius, and slower maximum speed than its rival, the Russian Mig-15, the kill ratio was still 10:1 in favor of the F-86 during the Korean War. This anomaly, that despite having worse planes (slower, bigger, less maneuverable) than the enemy, US pilots were still killing better, was the goad of his curiosity, which he assumed could be explained scientifically.

To aid in his research end, in 1960 Boyd enrolled at Georgia Tech to complete as BS in industrial engineering, where he studied thermodynamics, physics, and production lines, among other subjects; his interest in these subjects, it is said, did not lie in the mathematical details, but rather in the underlying principles and concepts. During this time he was said to have "wrestled with thermodynamics", the logical insights of which he began to apply back to his F-86 problem. [2] He would go on to develop his thermodynamics based theories of combat over the next 20 years.

Applications
Boyd, among other things, is credited for largely developing the strategy for the invasion of Iraq in the first Gulf War (1990-1991). In a letter to the editor of Inside the Pentagon, former Commandant of the Marine Corps general Charles C. Krulak is quoted as saying: "The Iraqi army collapsed morally and intellectually under the onslaught of American and Coalition forces. John Boyd was an architect of that victory as surely as if he'd commanded a fighter wing or a maneuver division in the desert."

Other
English complexity theory economist Antoine Bousquet, in his chapter three entitled "Thermodynamic Warfare and the Science of Energy", digressed into the some the thermodynamical details of Boyd's theories. [3]