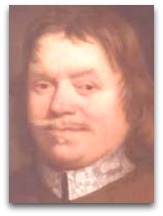 Overview
In 1678, Bunyan, in his The Pilgrim’s Progress: from this World, to That Which is to Come, one of the first claimed novels in English (Ѻ), tells the allegorical story of everyday man named “Christian” who begins his journey with knowledge of original sin from the Bible and travels through places such as the “Slough of Despond”, a boggy mire-like swamp where pilgrims' doubts, fears, temptations, lusts, shames, guilts, and sins of their present condition of being a sinner are used to sink them into the mud of the swamp; along the way is diverted by the secular ethics of Mr. Worldly Wiseman into seeking deliverance from his burden through the law, supposedly with the help of a Mr. Legality and his son Civility in the village of Morality, rather than through Christ, allegorically by way of the Wicket Gate, meets the laughing atheist, etc. (Ѻ)

§25. The Atheist
The following is the dialogue from chapter 25, “The Atheist”, of John Bunyan's 1678 The Pilgrim’s Progress:

Now, after a while, they perceived afar off, one coming softly along the highway to meet them.

Then Christian said to his fellow, “Yonder is a man with his back toward the Celestial City [Heaven], and he is coming to meet us.”

HOPEFUL: “I see him. Let us be careful now — lest he should prove to be a flatterer also.” 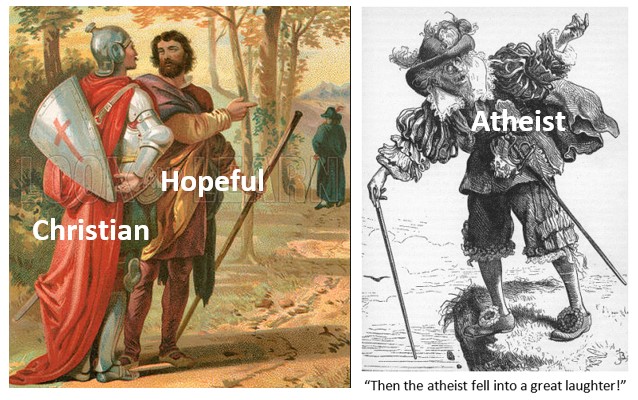 So the man drew nearer and nearer, and at last came up to them. His name was "Atheist", and he asked them where they were going.

CHRISTIAN: “We are going to the Celestial City.”

Then Atheist burst into laughter.

CHRISTIAN: “What is the meaning of your laughter?”
ATHEIST: “I laugh because I see what ignorant people you are — to take so tedious a journey, and yet are likely to gain nothing for your travel but pains.”

CHRISTIAN: “Why do you think we shall not be received?”
ATHEIST: “Received! There is no such place as you dream of in all this world!”

CHRISTIAN: “That is true — but there is in the world to come [afterlife].”
ATHEIST: “When I was at home in my own country, I heard of that place which you speak of. So I went out to find it — and have been seeking this City for these past twenty years; but I have not found it in all this time!”

CHRISTIAN: “We have both heard and believe that there is such a place to be found!”
ATHEIST: “Had not I, when at home, also believed — I would not have come thus far to seek it. If there had been such a place, I would have surely found it by now — for I have gone much further than you. So not finding it, I am going back home again, and will seek the pleasures which I had then cast away — for the vain hope of a world to come.”

Then Christian said to Hopeful, “Do you think that what this man has said is true?”
HOPEFUL: “Take heed — he is one of the flatterers! Remember what it has cost us once already for our hearkening to such a fellow. What! No Celestial City? Did we not see, from the Delectable Mountains, the gate of the City? Also, we are now to walk by faith. Let us go on, lest the man with the whip overtake us again.

“You should have taught me that lesson, which I will now remind you of: ‘Do not listen to any advice which would lead you to stray from the words of knowledge.’ I say, my brother — do not listen to him — but let us believe to the saving of our souls!”

CHRISTIAN: “My brother, I did not ask the question of you, because I doubted the truth myself — but to test you, and to hear your heartfelt response. As for this man, I know that he is blinded by the god of this world. Let us go on, knowing that we believe the truth, and that no lie is of the truth.”
HOPEFUL: “Now I rejoice in the hope of the glory of god!”

So they turned away from the man — and he, laughing at them, went on his way back home.

Quotes | On
The following are quotes on Bunyan:

“Much of Lincoln’s unhappiness, the melancholy that ‘dripped from him as he walked’, was due to his want of religious faith. When the black fit was on him, he suffered as much mental misery as Bunyan or Cowper in the deepest anguish of their conflicts with the evil one.”