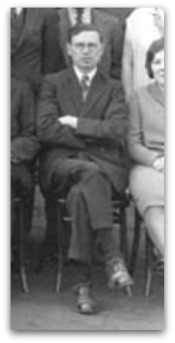 In chemical thermodynamics, John Alfred Valentine Butler (1899-1977), oft-cited “J.A.V. Butler”, and known to his friends and colleagues as “J.A.V” (Ѻ), was an English physical chemist noted for his 1935 textbook The Fundamentals of Chemical Thermodynamics, which uniquely focused on thermodynamic applications in electrochemistry, and his later 1940s to 1970 attempts to understand the "life process" via thermodynamics. [1]

In his 1946 article "Life and the Second Law of Thermodynamics" Butler outlined William Thomson's 1852 view of the second law, a view which he summarized by stating that Thomson "expressly excluded the operations of animate agencies" from the second law, which is not exactly correct; but, nevertheless, also discussed the recent views on thermodynamics and life expressed by Gilbert Lewis (1926) and Erwin Schrodinger (1944); the abstract of which is as follows: [4]

“Whether life processes obey the second law of thermodynamics or if life finds a way of evading the otherwise universal dissipation of energy has been something of a puzzle for a century. Kelvin left the matter open in his formulation of the second law, by expressly excluding the operations of ‘animate agencies’. Since then, opinions on both sides have been expressed, although a majority would probably be found in favour of the view that any local increase of ‘free’ energy is compensated by a greater amount of dissipation elsewhere, or as Schrödinger has recently put it in picturesque if somewhat inaccurate language, the organism feeds on ‘negative entropy’. On the other hand, G. N. Lewis referred to living organisms as “cheats in the game of entropy”, which “alone seem able to breast the great stream of apparently irreversible processes. These processes tear down, living things build up. While the rest of the world seems to move towards a dead level of uniformity, the living organism is evolving new substances and more and more intricate forms.”

Butler seems to have followed up this open-ended puzzle statement with a number of solution attempting works: Man is a microcosm (1950), Science and human life (1957), The site of protein synthesis in Bacillus megaterium (1958), Inside the living cell; some secrets of life (1959), Gene control in the living cell (1968), and lastly his The Life Process (1970), wherein he seems to conclude that "life" is something describable as a "process" or an energy process, as the focus of the book seems to be. [6]

Education
Butler completed undergraduate degree (1926/27) and his DSc (1928/29) at the chemistry department of the University of Edinburgh. [3]

Quotes | On
The following are about quotes: