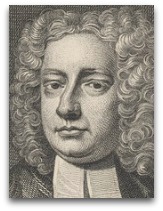 Overview
In 1718, Desaguliers built the following modified Savery engine, with a safety valve P invented by Denis Papin and a two-way valve K that could let either cold water or hot steam into the receiver A: [6] 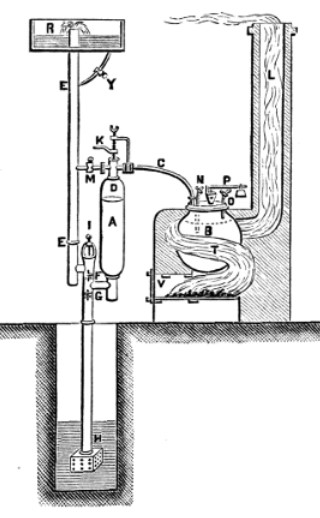 In 1728, Desaguliers, in his The Newtonian System of the World: the Best Model of Government, outlined what seems to have been the first draft of a “Newtonian government”, arguing how the ideal government should be run according to celestial mechanics. [1]

In 1734, Desaguliers had given 121 lectures in his “Course in Experimental Philosophy and Astronomy”, on mechanics, hydrostatics, pneumatics, and optics, explained via about 300 experiments. [3]

In 1744, Desaguliers, in his posthumously published A Course in Experimental Philosophy, Volume Two, gave a chapter on the origins of the steam engine, or what he called “fire engine” defined as an “engine to raise water by fire”, along with a diagram of the Newcomen engine of Thomas Newcomen, and a anecdotal account of how Thomas Savery, supposedly, burned a bunch of Edward Somerset’s 1655 Century of Inventions books (which was printed in London in 1663), when he had heard people claiming that he got the idea of the steam engine from him. [4]

Quotes | By
The following are quotes by Desaguliers:

“Captain Savery, having read the Marquis of Worcester’s book [Century of Inventions, 1655], was the first who put in practice the raising ‘water by fire’, which he proposed for the draining of mines. His engine is described in Harris’s Lexicon (see the word ‘engine’) which being compared with the Marquis of Worcester’s description, will easily appear to have been taken from him; though Savery denied it, and the better to conceal the matter, bought up all the Marquis of Worcester's books that he could purchase in Paternoster Row, and elsewhere, and burned them in the presence of the gentleman his friend, who told me this. He said that he found out the ‘power of steam’ by chance, and invented the following story to persuade people to believe it, viz. that having drank a flask of Florence at a tavern, and thrown the empty flask upon the fire, he called for a basin of water to wash his hands, and perceiving that the little wine left in the flask had filled up the flask with steam, he took the flask by the neck and plunged the mouth of it under the surface of the water in the basin, and the water of the basin was immediately driven up into the flask by the pressure of the air. Now he never made such an experiment then, nor designedly afterwards, which I thus prove: I made the experiment purposely with about half a glass of wine left in a flask, which I laid upon the fire till it boiled into steam: then putting on a thick glove to prevent the neck of the flask from burning me, I plunged the mouth of the flask under the water that filled a basin; but the pressure of the atmosphere was so strong, that it beat the flask out of my hand with violence, and threw it up to the ceiling. As this must also have happened to Captain Savery, if ever he had made the experiment, he would not have failed to have told such a remarkable incident, which would have embellished his story.”

“A gravity-like force of attraction is now as universal in the political as in the philosophical world.”