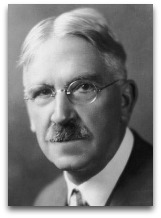 Overview
In 1931, Dewey, in his Philosophy of Civilization, gave the following sharp statement: [1]

“There is no superstition more benumbing, I think, than that the current notion of things are not what they are, and do not do what they seem to do, because these things have themselves come into being in a causal way. Water is what it does rather than what it is caused by. The same is true of the fact of intelligent choice. A philosophy which looks for freedom in antecedents and one which looks for its consequences in a developing course of action, in becoming rather than in state of being, will have far different notions about it. Yet we cannot separate power to become from considerations of what already antecedently is.”

Zucker
American physical historian Morris Zucker devotes a certain amount of effort, in his 1945 A Field Theory of History, to refute Dewey’s supposed contention that a science of history is impossible, arguing the following in response: [3]

“Physical phenomena in the gross is not concerted with the internal structure of each atom in each successive moment, nor is history with the relation of each individual being every moment of time. History is vitally interested in the laws of continuity in finite space and definite time. Were it not for the existence of these laws developed from definite relations subsisting among the mass, all science would be impossible. These propositions are fundamental in physics, and they apply with equal footing in history. Society is a definite reality. All we have to do is to look about us to be conscious of its ubiquitous presence though no one yet has examined it under the microscope or tested it in a chemists’ retort. The retort will be that we are comparing inert matter, iron, with a living reality, society. Matter [after all] is not so terribly inert.”

“I feel the gods are pretty dead, though I suppose I ought to know that || however, to be somewhat more philosophical in the matter, if atheism means simply not being a theist, then of course I'm an atheist. But the popular if not the etymological significance of the word is much wider. It has come to signify it seems to me a denial of all ideal values as having the right to control material ones. An in that sense I’m not an atheist and don’t want to be labelled as one.”