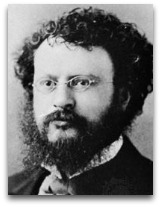 In existographies, John Fiske (1842-1901) was an American philosopher historian noted, in hmolscience, for his multivolume 1874 Outlines of Cosmic Philosophy, which is filled with a number interesting digressions on what seems to be a type of evolution materialism based philosophy.

Overview
In 1874, Fiske, in his Outlines of Cosmic Philosophy: Based on the Doctrine of Evolution, with Criticisms on the Positive Philosophy, gives commentary on a number of thinkers, such as Jacob Moleschott, Hermann Helmholtz, among others. On prediction, as quoted by Morris Zucker, Fiske states: [1]

“As surely as the astronomer can predict the future state of the heavens, the sociologist can foresee that process of adaption must go on until in a remote future it comes to an end in proximate equilibrium.”

Zucker, latter, classifies or groups Fiske as follows, namely as what seems to be a social mechanism theorist:

At one point, Fiske says the following: (Ѻ)

“The ideal goal of physical inquiry would be to furnish algebraic equations for every curve described by every particle of matter during the entire series of transformations, from the arrested molar motions of the gravitating particles of the sun, down to the endlessly complex molecular motions which take place within the cerebral tissue of a mathematician engaged in solving partial differential equations.”

Quotes | By
The following are quotes by Fiske:

“Is it honest for me to go and sit there on communion day and drink the wine and eat the bread while feeling it all to be mummery?”

“The Hindu sacred writings contain all the myths and fables found in the Cristian Bible.”