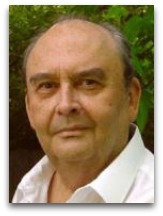 In hmolscience, John Garcia (1936-2001) was an American writer noted for his 1971 book The Moral Society, in which, building on the work of French philosopher Pierre Teilhard, he advocated a human moral evolution through a mixture of discussions on entropy and the entropic force. [1]

Overview
in 1971, Garcia, in his The Moral Society: a Rational Alternative to Death, argued the following key opinions: [1]

“Entropy is the counter-force to evolution. Entropy drives mind toward matter and matter toward chaos. Entropy manifests itself in mind by a decrease in awareness. The maximum form of entropy for life is death. The ultimate form of entropy is chaos. Imaginary awareness is the direct manifestation of entropy. Mind succumbs to the entropic force by declining the challenge of the game of life. Life succumbs to entropy by specialization, i.e. by acquiring an ever more fixed and specific form until it is indistinguishable from matter. Matter succumbs to entropy by becoming randomly dispersed until it no longer has a specific form and it becomes chaotic energy.

Both evolution and entropy are natural manifestations of the cosmic force. It is just as "natural" to sink into matter as to rise to greater mind. It is only possible to rise to greater mind, pure thought, by playing the game of life in the presence of total feedback. Man can continue to have feedback only if he plays the game deliberately.”

In 1991, Garcia published Creative Transformation, his third book, with chapters on the evolution of matter, life, and mind (having sections on social entropy); which is said to be his finest work. [2]