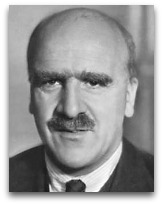 Hamilton’s rule | Two brothers or eight cousins
In 1924, Haldane, in a series of papers, worked out the consequences of Mendelian genetics for the theory of evolution. [7]

The so-called theory kin selection, i.e. the premise that any individual person would be willing to die for so many genetically-related kin, supposedly, arose in the work of Sewall Wright (1924), Ralph Fisher (1930) and Haldane (1932), who each were working out the mathematical theory of population genetics. [4][7]

Sometime later, “in the fifties”, as recalled by Haldane’s graduate student John Maynard Smith (1920-2004), who was either there or told the story by Haldane, Haldane was with some other of is graduate students at a London pub called The Orange Tree, working on the mathematics of kin selection, during which time Haldane, who had been calculating on the back of an envelope for some minutes, suddenly sprang up and announced the following humorous conclusion, deduced from his calculations:

“I would gladly die [lay down my life] for two brothers or eight cousins.”

The basic premise here, being that because siblings are on average 50% identical by descent, nephews 25%, and cousins 12.5%, that, owing to the Darwinian paradigm of survival of the fittest, with its inherent supposed overarching aim to pass on one’s genes, that human kin lives can be equated as follows:

Haldane later referred to this “idea”, which, to many, has become the laughing stock, semi-truthful, semi-funny, semi-absurd, punchline joke of genetic based natural selection theory, in an article in Penguin New Biology. [5] Alternatively, according to Smith (1976), as the memory of the details of this infamous statement seems a bit opaque to him, “Haldane’s remark, I guess was made when he was writing the Penguin New Biology article, and remembered it.” [6]

In 1964, English evolutionary biologist William D. Hamilton put the above logic, supposedly done independently, into formulaic form, and theory has since become known as Hamilton’s rule, the supposed basis of the theory of “kin selection”.

“When ultra-violet light acts on a mixture of water, carbon dioxide, and ammonia, a vast variety of organic substances are made, including sugars and apparently [Edward Baly, 1920s] some of the materials from which proteins are built up. The first living or half-living things (see: half-alive theory) were probably large molecules synthesized under the influence of the sun’s radiation, and only capable of reproduction in the particularly favorable medium in which they originated.”

Here, to note, in Haldane’s supposition of a ‘half-living thing’, we recall American electrochemical engineer Libb Thims’ 2007 ridicule (Human Chemistry), depicted adjacent, of the more-alive/less-alive theory associated with the RNA life theory; in another instance he states:

“The link [line] between the living and dead matter is somewhere between a cell and an atom.”

The half-living thing theory or the more alive, alive, not alive divide is one of the precursory mindsets to the defunct theory of life.

Other
In 1924, Haldane in his book Daedalus, used the name ‘Daedalus’ in the sense of a symbol of the revolutionary spirit of science; a book which was cited by Russian mineralogist Vladimir Vernadsky in his biosphere theory.

In 1932, Haldane, in his The Causes of Evolution, outlined a "genetic theory of evolution, and postulated that some two billion years ago something of microscopic size separated from the ‘hot thin soup’ (see: primordial soup).

“Teleology is like a mistress to a biologist: he cannot live without her but he’s unwilling to be seen with her in public.”

“An ounce of algebra is worth a ton of verbal argument.”