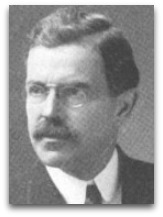 In hmolscience, John Grier Hibben (1861-1933) was an American mathematician, physician, and theologian noted, in philosophical thermodynamics, for his 1903 critiques of the social energetics philosophies of Wilhelm Ostwald.

Overview
In 1903, Hibben, in his “The Theory of Energetics and its Philosophical Bearings”, gave short summary of the philosophical implications of German chemist Wilhelm Ostwald’s 1901 lectures on Natural Philosophy. [1] The following is one of seven criticisms discussed by Hibben on Ostwald’s energetics philosophy: [2]

“The physical world is characterized by decrease of energy and increase of entropy. The reverse is true of the world of thought.”

Education
Hibben obtained his BS in mathematics from Princeton, graduating valedictorian of his class. In 1882, he spent a year in philosophical studies at the University of Berlin. He became an ordained as a minister of the Presbyterian Church in the United States of America by the Carlisle Presbytery on May 19, 1887. He received a PhD in 1893 with a dissertation on "The Relation of Ethics to Jurisprudence," became assistant professor in 1894, and Stuart Professor of Logic in 1907. In 1912 he was elected fourteenth president of Princeton.