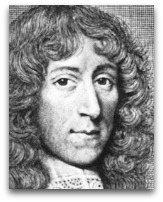 Overview
In 1666, Mayow, in his de Respiratione, reported on experiments he had done with candles burning and mice breathing in sealed containers to calculate how “nitro-aerial” (oxygen) a mouse breaths, in respect to volume change. (Ѻ)

In 1674, Mayow introduced some type of chemical theory the phenomena of chemical combination depend upon peculiar attractions, which exist between the minute particles of different bodies

In 1937, James Partington, in his Short History of Chemistry, stated that some classify Mayow’s chemical attraction theory, along with the theories of Étienne Geoffroy (1718), and Torbern Bergman (1775), as the “old theory” of chemical affinity or elective affinity. [1]

Quotes | On
The following are quotes on Geoffroy:

“The suggestion by Mayow and by Newton, that the phenomena of chemical combination depend upon peculiar attractions, which exist between the minute particles of different bodies, ought perhaps to be regarded as the first successful attempt to lay the foundation of chemistry as a science, and to distinguish it from the other branches of natural philosophy. The attention given to chemistry by some of the more distinguished members of the Academy of Sciences at Paris, the delivery of lectures on this subject in the French language by the elder Lemery; the curious experiments of Homberg on phosphorus, metals and salts; the discovery of the remarkable effects produced upon various bodies by the burning glass; and the ingenious method conceived by Geoffroy of framing tables, which should exhibit the relative degrees of chemical affinity between different substances,—had all contributed to render the pursuits of chemistry more generally popular in France than they appear to have been at the same period in any other country of Europe.”