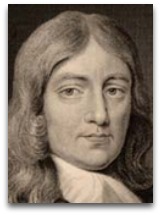 Overview
In 1667, Milton, in his epic poem Paradise Lost, digressed on the biblical story of the "fall of man", i.e. the temptation of Adam and Eve by the fallen angel Satan and their expulsion from the Garden of Eden.
Milton, supposedly, listed Thomas Hobbes as an author that should not be tolerated. [2]
Other
In 1999, Forbes Allan, in his literature thermodynamics novel Milton’s Progress, a supposed play on Milton's Paradise Lost, presents a conversation between a character named John and a Dr. Snipe, along with references to a “Ilya Meiliakin”, a play on Ilya Prigogine, noted for his 1970s dissipative structure theory, and Robert Millikan, noted for his 1909 oil drop experiment (Ѻ), concerning human life, which is described as “the most effective multiplier of entropic decay in the universe”, and man’s quest to understand his function in the scheme of things: [1]

“It’s just human thermodynamics, my friend,” John said stiffly, “you’re inside the jaws of laws beyond your ken.” That’s an acer poem, he decided, which nicely sums up the plight of humankind and the worthlessness of being. “Maybe I’ve stumbled upon a new law of physics!” it flashed on him suddenly: “—that life-driven anti-entropic processes are an integral component of all the second law activities and provide an engine with which to accelerate the overall degradation of energy into heat! … Or would that be a ‘fourth’ law of thermodynamics? …”

Quotes | On
The following are quotes on Milton:

“How little the dialectic of the idea of plenitude determined Milton's scheme of things is most clearly shown by his adoption of the doctrine of Jerome and of Origen — which Thomas Aquinas and Dante had expressly rejected.”