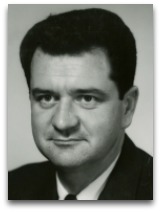 In hmolscience, John W. Patterson (1936-) is an American materials scientist, engineer, and atheism advocate noted for his 1975 to present creationism debates, commentaries, publications, courses, and symposiums, etc., aimed at combating creationism, religion, and supernatural phenomena. Paterson is famous for giving handouts of various creationist claims about thermodynamics to his thermodynamics students to find the reason for the incorrectness of each statement as homework assignments. [2]

Creationism | Debates
In 1975, Patterson engaged into a nationally public debate with David A. Weltha (c.1941-) (Ѻ), a fellow professor home economics and family environment, who promoted and gave lectures on a variety of topics such as astrology, hypnosis, life after death (afterlife), and other unexplained phenomena; during which time he gave a seminar at Iowa State University (ISU) on reincarnation, a subject that elicited the most vocal criticism from Patterson, the resulting debates, which spilled out into various forums, e.g. radio show interviews, articles, chapters, many of which making national headlines, would continue, it seems, into 2005.

Patterson’s collected papers, at ISU special collections, contain clippings and correspondence accumulated by Patterson in his efforts to dispute supernatural phenomena, creationism, religion, and even claims of perpetual motion.

Patterson, at one point, Patterson gave a seminar on critical thinking which in turn led to a dispute with David R. Boylan, dean of the College of Engineering. [3] Boylan, previously, in 21 Scientists Who Believe in Creation (1977), published apologetics arguments to the effect that he used the second law as an apologetic against abiogenesis to “defend Biblical truths”. [5]

Patterson's papers also include regular correspondence with several friends and colleagues. His correspondences with Henry P. Zuidema and Frank Trumpy document his efforts in opposition to creationism. He became a regular correspondent with Erica Heftmann, author of Dark Side of the Moonies, about religious cults and even contemplated co-authoring a book together. Also included in the collection are letters between Patterson and William "Bill" Brouwers, a pastor from Indiana. Brouwers and Patterson developed a friendship despite their opposing views and co-taught a class for the Iowa State University college for seniors on "The Conflicting Worldviews of Theism and Atheism."

At the 1981 meeting of the Iowa Academy of Sciences, Paterson gave the following response to a question about his paper, which criticized creationists: [7]

“If they can lie like hell about us, the least we can do is tell the truth about them.”

In 1983, Patterson, in his “Thermodynamics and Evolution”, a chapter contribution to Scientists Confront Creationism, did battle with Henry Morris; in which, as summarized by Helge Kragh (2008), he gave a decent presentation of the entropy order from disorder paradox, often used by creationists as an ontic opening polemical device to argue for the existence of god: [1]

“The name ‘ectropy’ goes back to 1900, when it was introduced by Georg Hirth in the context of biological systems (Hirth, 1900). It became widely known through Felix Auerbach’s Extropismus oder die physikalische Lehre des Lebens (Leipzig, 1910). The mistaken view that the evolution of life forms contradicts the second law continued to play a role during the twentieth century, since the 1960s often in the context of new creationism. Local processes, such as the building up of complicated molecules from simpler ones, can occur even though they involve a decrease in entropy. Because the energy diminishes in such a way that the free energy is lower for the product, they are in full accord with the second law of thermodynamics. For an overview, see: Patterson (1983).”

In 1983, Patterson authored an article for the American Atheist, in which he excoriated all of his fellow engineers who dared to be politically incorrect and believe in the concept of “design in nature resulting from an intelligent Creator.” Patterson labeled any engineer who believed in creation as “incompetent,” and charged the professional societies who accepted their credentials as being “irresponsible.” (Ѻ)

“Patterson is professor emeritus of materials science and engineering at Iowa State University at Ames. Science Citation Index has designated one of his thermodynamics-associated papers as a “classic” most cited in its area. A formidable debater against the creationists most notorious platform artists, he has never hidden his atheism and has always made it clear that he disagrees with the notion that there is no contradiction between science and religion.”

In 2014, Patterson published a commentary on the Bill Nye vs Ken Ham debate. [8]

In 2015, Patterson was listed as scientific and technical consultant for skeptical Inquirer. (Ѻ)

Education
Patterson attended Baldwin-Wallace College, in the 1950s, before being drafted into military service in 1955, then completed a combined BS and MS in 1962 in mining engineering and a PhD in metallurgical engineering, both at Ohio State University, thereafter becoming a materials science and engineering professor at Iowa State University, focusing on electrical transport properties of solid electrolytes at elevated temperatures; retiring in 1995. [1]