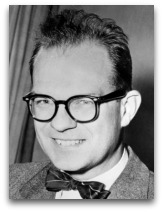 “There are three distinct types of locked-in pat­terns in collective behavior that need much more study from a reinforcement point of view to see the microstructure that gives rise to a kind of social thermodynamics. The first type is what Adam Smith referred to as the invisible hand of the mar­ketplace. He used this term to emphasize the absence of any overt or mechanical causal mecha­nism in the stabilization of prices or wages around some median value in a free economic market of competing individuals. A similar invisible hand tends to equalize and centralize the political parties in systems with majority (rather than proportional representation) elections.

The second type might be called by contrast the invisible fist, where the competition of numerous individuals does not produce agreement on a median value, but instead runs away from the median, with either escalation or elimination past some point of no return. This happens with Gresham's law in economics, where "bad money drives out good." Several of our current crises have this characteristic, as with the escalation of arms races or unrestrained pollution or the elimination of good railroad service, as we have noted. The urban crisis is made almost unsolvable by multiple complex escalations of this kind, as slum clearance drives slum dwellers else­where, and the poor are migrating into the city to get welfare money, while the rich are moving to the suburbs to escape taxes.

The third type of locked-in pattern could be called the invisible chain. This signifies a loop of transactional relationships among two or more people, forming self-maintaining systems that are sometimes very damaging and very hard to get out of. Married couples frequently get locked into repetitive disagreements over sex or money or the temperature of the room or whether to go to the show early or late. Eric Berne (1964) has discussed various locked-in networks of this kind in his book Games People Play. In his game of "alcoholic," for example, he shows how the alcoholic is trapped in a self-maintaining game with three or four other people, such as the long-suffering wife, the best friend, and the corner bartender, with each of their responses reinforcing the others for their responses.

Over a lifetime, our originally accidental roles in many such chains, beneficial and damaging, may come to create and maintain the responses that finally appear as our personal or social "character." The self-maintaining character of federal bureaus or of the military-industrial complex come from large-scale invisible chains of the same sort. A careful analysis of such spontaneous lock-ins could be crucial today.”

In 1962, Platt published an article positing a coming genius explosion, wherein he give IQs of geniuses.

In 1962, Platt, in his “The Coming Generation of Genius”, in a discerning manner, gauged a number of genius IQs as follows: [1]

“There is an apocryphal story physicists tell [see: fly bicycle problem] about the late John Neumann—probably a 180—that shows the difference they feel between such really high-speed minds and those of ordinary brilliance.

In mental ability, an adult chimpanzee can solve mechanical problems about as well as a six-year-old child. This ape might be given an IQ of about 40. A moron would be around 70, an average adult 100, a PhD 140, an Einstein 180 or better. The hardest problems can be solved only by men of the greatest ability, and brilliant men are few.

The second hard fact about the IQ scale is that there are not very many brilliant men at the top of it. At the 190 level, which might describe Archimedes, Newton, and Gauss, we have been seeing about one every five hundred years.

The following, from the above description, is a tabulation of Platt's ranking scheme:

The article seems to have been reprinted in Platt's 1962 The Excitement of Science. [4]

Platt vs Polanyi | Reductionism vs Emergence
In 1967, Platt, at during the annual AAAS meeting, at Rockefeller University, was on a discussion panel (Ѻ) with Michael Polanyi, Ernest Nagel, and Barry Commoner, chaired by Gerald Holton, about the interplay of reductionism and emergence in biology, physics, and chemistry, i.e. questions about the nature of scientific explanation and its relevance for questions of life and religion; the abstract of which is as follows: [7]

“In the attempt to relate religion to the sciences, philosophers and theologians and other scholars are apt to be bothered by what is called ‘reductionism’, a common form of which is the supposition that explanations of phenomena of practically any kind—including human, social, psychological, and even (according to some) religious phenomena—can be reduced to an explanation in terms of physics. When distinguished scientists [e.g. Polanyi] challenge this reductionistic view, it has an interest even greater than when it is challenged by humanists. While the editor of Zygon is not disturbed by reductionism, many others are; hence the importance of publishing this symposium which may not be the last word, but which is nevertheless on the new frontier of the age-old debate. Michael Polanyi gave an early version of his now famous answer to this question at the Center for Advanced Study in Theology and the Sciences on May 81, 1967. A more detailed version will be found published in Science, 160:1309-12 (Jun 21, 1968). But the version printed here and the significantly revealing commentary by other distinguished scientists and philosophers of science may have a special value, not only for those concerned with relating religion and the sciences, but for all who are concerned to understand the nature of scientific explanation in general and its explanation of life in particular. The text printed here is a modestly edited transcription of the audio tape recording of the informal panel discussion, and the reader may feel that be is attending an exploratory conversation of experts contemplating frontier questions about the nature of scientific explanation and its relevance for questions of life and religion.”

Quotes | On
The following are Platt related quotes:

“I read this book when it was first published. What it imparted to me has stuck with me through the years … undergraduate school, graduate school and law school … I recently referred to it in a discussion within the software company I founded and run. The concepts in the book about maintaining mental sharpness and the pure excitement of the learning process are without parallel. Should be read by every student and teacher of science.”

“The needs of man, if life is to survive, are usually said to be four -- air, water, food, and in the severe climates, protection. But it is becoming clear today that the human organism has another absolute necessity... This fifth need is the need for novelty -- the need, throughout our waking life, for continuous variety in the external stimulation of our eyes, ears, sense organs, and all our nervous network.”

“Quiz show facts are not enough.”

“To say that basic science is exciting may sound like a contradiction... But I would remind you that there are two intellectual excitements that are not tame at all and that we remember all our lives. One is the thrill of following out a chain of reasoning for yourself; the other is the pleasure of watching several strongly individualistic personalities argue about their deepest convictions. That is to say, the thrill of a detective story and the pleasure of watching a play by George Bernard Shaw.”

“Due to the new patterns of marriage, e.g. next few years, the number of IQs in the 180s getting out of college in the next few years may not be a mere dozen but hundreds. It could be an explosion of genius such as the world has never seen.”

“Unfortunately, few of us are big enough or matter-of-fact enough not to be offended when a smart man shows he knows he smart.”

“Certain drugs in the body can strongly affect mental behavior in various ways, but the sex hormones are particularly powerful. Rats, male or female, injected with a trace of male hormone at a certain spot in the brain, come out fighting: with a tract of female hormone at another spot, they want to mother everything in sight. The survival of the species mist often have depended on this sensitivity to our internal chemical balance.”

“We are not in the grip of incomprehensible forces. The mind of man can determine the quality of the life of man, not by mystical but by operational methods.”