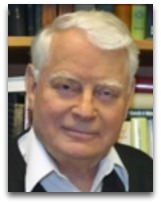 In hmolscience, John Michael Prausnitz (1928-) is an American chemical engineer, specializing in molecular thermodynamics of phase transitions, noted his 1986 work on the history of chemical thermodynamics, and for his 2013 opinion to American electrochemical engineer Libb Thims that a “two cultures department” would not be welcome at University of California, Berkeley, slated to be centralized within the department of chemical and biomolecular engineering, and furthermore that he did not believe that thermodynamics had applicability in the humanities or specifically out side of hard science and engineering proper: [1]

“I don't know what the Rossini debate is but I hope to find out. No, your idea for a department for teaching two cultures would not be appreciated at Berkeley. In the social sciences and in some humanities, thermodynamics may be useful as an analogy, as a suggestion for looking at a problem (e.g., information theory) but beyond that, I see little use of thermodynamics outside science.”

Discussion
This is a very interesting position to take by a chemical engineer, reminiscent of Japanese chemical engineer Tominaga Keii’s 2004 chemical thermodynamics chapter subsection “Chemical Affinity in 1806”, wherein he gave his opinion that Goethe’s “[Elective Affinities] did not add any scientific knowledge” (see: HC pioneers). Prausnitz’s opinion here, however, of “seeing little use of thermodynamics” outside of hard science proper, does not corroborate with the chronological listing of over 500 HT theorists, over the last two centuries to have used thermodynamics outside of hard science proper.

Religion
Prausnitz seems to have an inherent theistic ingrained science belief system. In 2011, for example, interviewer Anna Rascouet-Paz, stated that he had an “interest in philosophy and theology”, and when queries about how, presently, “God and science seem to be at war”, he cited quotes from William James (a theist), and went on to state how he doesn’t see any problem between science and religion. The following is a “god term” usage also employed during the interview: [2]

“You can use your God-given good brains in a much broader way and I think it is very satisfying to do that.”

See the atheism timeline to see how these types of religious views affect things.

Education
Prausnitz completed his PhD in 1955 with a dissertation “Liquid-Phase Turbulent Mixing Properties” at Princeton University. Prausnitz currently is professor emeriti of the graduate school of the University of California, Berkeley, department of chemical and biomolecular engineering.