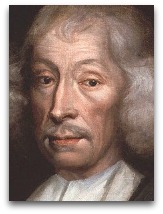 In existographies, John Ray (1627-1705) (IQ:170|#350) (Cattell 1000:867) (Murray 4000:15|B) (CR:8) was an English parson, naturalist, botanist, and zoologist; noted for his proverb commentary on beauty, money, and power; e.g. supposed coiner of the phrase "beauty is power"; for his commentary on the fortuitous concourse of atoms model formation of things; and for his classification scheme for grouping species, later referenced by Carl Linnaeus in his more famous Linnaean classification; characterized a “forgotten genius” (Ѻ).

The "beauty is power" proverb is oft-attributed to Ray—the most popular modern rendition of which is:

“Beauty is power; a smile is its sword.”

The original source of this exact quote, however, remains to be determined; one version, from a 1737 collection of his proverbs, reads: [1]

“Beauty is potent, but money is omnipotent.”

In the same work, Ray also gives the inquisitive proverb: “the prerogative of beauty proceeds from fancy.”

Quotes | On
The following are quotes on Ray:

“Ray was the first to formulate the notion of the species to distinguish plants and animals from one another. His taxonomic system of 1693, based on that of Aristotle, used such anatomical features as nature and number of toes and teeth to classify the animals. Many thinkers in the eighteenth century, especially theologians, disbelieved in the possibility of the extinction of species. Ray, however, demonstrated convincingly that fossils represent extinct animal species, and provided the basis for Cuvier's more thorough system of paleontology.”

“A wonder it must be that there should be any man found so stupid as to persuade himself that this most beautiful world could be produced by the fortuitous concourse of atoms.”

“It would follow, that many species of shell fish are lost out of the world, which philosophers hitherto have been unwilling to admit, esteeming the destruction of any one species a dismembering of the universe, and rendering it imperfect; whereas they think the divine providence is especially concerned to secure and preserve the works of creation. That it is so, appears, in that providence was so careful to lodge all land animals in the ark at the time of the great deluge.”