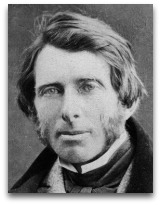 Ruskin, in this respect, in social and economic applications of thermodynamics, is cited by a number of thinkers, including: Frederick Soddy, Patrick Geddes, Thomas Wallace, and Greg Myers.

Quotes | On
The following are quotes by Ruskin:

“The ‘motion’ of an energy system is its ‘behavior’. Various types of organization of systems produce on that basis various types of behavior. A gray rock, said Ruskin, is a good sitter. That is one type of behavior. A darting dragon-fly is another type of behavior. We call the one alive, the other not. But both are fundamentally balances of give and take of motion with their surround. To make ‘life’ a distinction between them is at root to treat them both artificially.”

— Charles Sherrington (1938), "Man on His Nature"; reference, supposedly, to an 1849 pocket book note, by Ruskin, scribbled to his father about how he was sitting on a gray rock on a glacier while waiting for the fog to clear

Quotes | By
The following are quotes by Ruskin:

“The highest strength of [artistic] genius is generally marked by strange unconsciousness of its own modes of operation, and often by no small scorn of the best results of its exertion. The inferior mind intently watches its own processes, and dearly values its own produce; the master-mind is intent on other things than itself, and cares little for the fruits of a toil which it is apt to undertake rather as a law of life than a means of immortality. It will sing at a feast, or retouch an old play, or paint a dark wall, for its daily bread, anxious only to be honest in its fulfillment of its pledges or its duty, and careless that future ages will rank it among the gods.”

“When I seriously believe a thing, I say so in a few words, leaving the reader to determine what my belief is worth. But I do not choose to temper down every expression of personal opinion into courteous generalities. Let us learn to speak plainly and intelligibly first, and, if it may be, gracefully afterwards.”

“Morality does not depend on religion.”